Published by
Frédéric Michas,
May 19, 2022
Boiron is a French company specializing in the manufacture of homeopathic products. The company was founded through a merger in 1967 and has been a world leader in the homeopathic product market ever since. The Boiron Laboratories have their headquarters in Messimy in the Rhône department, less than 20 kilometers from Lyon. The company is part of the CAC Small, a stock market index operated by Euronext and used on the Paris stock exchange. According to Boiron´s capital breakdown by shareholders, in 2021, the Boiron family - notably through two financial holding companies: Sodeva and SHB - owned around 70 percent of the enterprise's capital. During that year, Boiron's market capitalization fell to 662 million euros. With approximately 1,800 employees in 2021, the group's workforce has been declining since 2012, when Boiron laboratories still had nearly 2,600 employees. Over two-thirds of employees work in product promotion, while only 0.4 percent are involved in research.

France, the leading market for the Boiron group

Boiron, a specialist in homeopathy

The foundations of homeopathy are based on the idea that a substance that provokes a symptom can be used to treat the same symptom of the disease. The second central principle of homeopathy is the "law of infinitesimal", which implies a process of serial dilutions and agitation. This medicinal practice is widely accepted among the French population. Nearly two-thirds of French people believe in the therapeutic benefits of homeopathy. For the Boiron Group, homeopathic treatments (including Oscillococcinum, the group's flagship product) represent the main revenue segment. Non-proprietary homeopathic remedies, on the other hand, accounted for 195 million euros in 2021.

In the following 5 chapters, you will quickly find the 28 most important statistics relating to "Boiron". 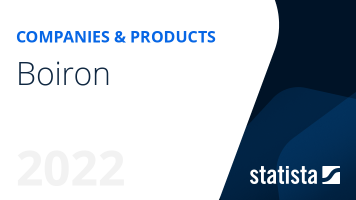 The most important key figures provide you with a compact summary of the topic of "Boiron" and take you straight to the corresponding statistics.