Some of the most popular Polish dishes, such as pierogi or bigos, contain meat as their key ingredient. Polish cuisine is the most popular cooking style in the country. However, there is a change in consumer spending on catering services. In 2020, expenditure decreased by almost 11 million zloty. On the other hand, delicatessen meals were the most frequently purchased ready meal among both men and women. Despite Polish cuisine dominating Poles’ eating preferences, there are also other foods that the Slavs are eager to try. The leading international cuisine that Poles were most curious about was Georgian, followed by varieties of Asian food.

Dietary habits of the Polish population

The most popular method used by Poles to maintain a healthy diet on a daily basis was cooking and preparing their own meals. Even though the vast majority of men and women have never been on a diet focused on weight loss, calorie restriction was the most popular dietary restriction in the country. The main drive behind Polish people’s nutritional choices was the desire to achieve an overall healthy lifestyle. Especially consumers aged 55 years old and overvalued the importance of balanced eating. In order to maintain a healthy diet, Poles most often quoted attempt to consume a lot of fruit and vegetables.
Dietary supplements are becoming increasingly popular in Poland. These manufactured products can be taken in the form of a pill, capsule, powder, or liquid. The dietary supplements market value has been on the rise over the last few years. In 2021, Polish consumers spent 6.4 billion zloty on vitamins, minerals, amino acids, and herbs. Multivitamin preparations were the most popular type of food supplement; as many as 63 percent of Polish men and 60 percent of women took these products.

Is Poland vegetarian or vegan friendly?

The vegan and vegetarian markets have seen a rise in popularity, and new products are continuously introduced on the global stage. Therefore, a vegan diet and foods are becoming the next new trend in Poland's food landscape. As a result, the total population's share of Polish vegetarians and vegans increased by approximately one percent between 2020 and 2021. In 2020, one in ten plant-based meal consumers assessed the availability of wholly plant-based foods in restaurants as very good.
The country was equally divided in terms of plant-based meat alternatives knowledge; one in two Poles stated that they were familiar with the term in 2021. Feeling sorry for animals was the biggest motivation for vegetarians to stop eating meat in 2022. Climate change, which may have been caused by excessive meat consumption, was almost as important to them. The largest percentage of vegetarians in Poland in 2020 were people aged 18 to 25. Plant-based meat products were present in only one in ten households. Plant-based beverages accounted for the country's highest sales value of plant-based foods, at 270 million zloty in 2020.
This text provides general information. Statista assumes no liability for the information given being complete or correct. Due to varying update cycles, statistics can display more up-to-date data than referenced in the text.
Published by G. Wanat, Nov 17, 2022

Most vegan-friendly city in Poland
Poznań

Most vegan-friendly cities in Poland 2021, by number of restaurants per 10k people

Eating out and online food delivery

Eating behavior during COVID-19 in Poland 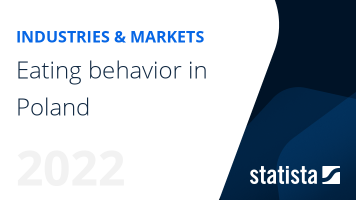 The most important key figures provide you with a compact summary of the topic of "Eating behavior in Poland" and take you straight to the corresponding statistics.