Roche is currently the largest pharmaceutical company based on prescription drug sales worldwide. Furthermore, it is the world’s leading company in oncology, which by itself is the most revenue-generating therapeutic area worldwide. For many years, Roche was ranked among the top five pharmaceutical companies, but it was only recently that it made it to the very top. In 2022, the company reported a total revenue of 63.3 billion Swiss francs, or around 69 billion U.S. dollars.

Genentech acquisition was a decisive step

Roche – with the full name F. Hoffmann-La Roche AG – originates from and is headquartered in Basel, Switzerland, where it was established in 1896. It is interesting that another pharmaceutical giant – Novartis – is also based in Basel, making the city with a population of roughly 200 thousand a center of the global pharmaceutical industry. Already in the early 1980s, the company started focusing on genetic engineering, however it was the acquisition of U.S. company Genentech in 2009 – still one of the all-time largest pharmaceutical M&A deals – that made Roche a biotech heavyweight. Today, Roche is especially active in cancer therapies which generate 45 percent of the company’s pharmaceutical revenues. Among others, key areas are immunology and neuroscience. Besides pharmaceuticals, Roche is involved in the diagnostics segment, with a focus on in-vitro diagnostics. Thus, Roche is also a medical device company. During the pandemic, Roche Diagnostics successfully produced and marketed a variety of COVID-19 tests.

The global leader in pharmaceutical R&D

Among big pharma companies, Roche is the leader based on the amount of dollars annually spent on research and development. According to some forecasts, the Swiss company will remain at the top of R&D spenders by 2026. Roche’s percentage of total revenues spent on R&D is predicted to remain clearly above 20 percent. As it is often stated, due to the limited duration of patent rights and the ‘threat’ of a branded product going generic, pharmaceutical companies are forced to be innovative or to buy innovation via acquisitions of other companies. In regard to the COVID-19 pandemic, Roche was among the leading companies by number of drugs in development.
This text provides general information. Statista assumes no liability for the information given being complete or correct. Due to varying update cycles, statistics can display more up-to-date data than referenced in the text.

Value of Roche's acquisition of Genentech in 2009
46.8bn USD

Largest M&A pharmaceutical deals ever as of 2022 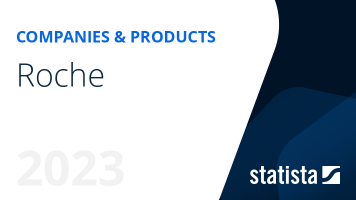 The most important key figures provide you with a compact summary of the topic of "Roche" and take you straight to the corresponding statistics.