Around 692,200 alternative fuel vehicles were a part of the European Union’s commercial fleet in 2021, including a wide variety of low to zero-emission units. This fleet volume represented a rise of over eight percent year-over-year, in line with the steady increase recorded since 2014. Vans made up over 89 percent of this alternative fuel commercial vehicle stock, making this vehicle type traditionally under 3.5 metric tons in gross vehicle weight the leader in the fleet. Annual sales were in line with the fleet distribution. Vans were the best-selling low-emission commercial vehicle type in Europe in 2021, representing close to 85 percent of sales. Germany was the largest European market for new alternative fuel van registrations, with close to 16,300 low-emission LCVs sold in 2021.

The higher demand for low-emission light-duty commercial vehicles compared to trucks and buses is linked back to the easier accessibility of charging points for smaller electric and plug-in hybrid van models due to their use in urban traffic. However, progress can still be made in the new energy LCV market. European manufacturers recorded the highest average greenhouse gas emissions across van producers in 2020. The Italian Iveco generated just under 205 grams of carbon dioxide per kilometer, with MAN and Daimler Truck close behind. Additionally, fully electric LCVs only represented 3.5 percent of the van shares in the European Union, far outweighed by diesel vehicles.

In 2020, the purchase cost of fully-electric heavy-duty trucks also amounted to some 380,500 U.S. dollars, over three times more than a diesel truck, contributing to the lower adoption of electric trucks and buses by the European market. Diesel vehicles were still the most popular type, but a slow shift towards zero emissions started with the new 2019 standards. Heavy-duty commercial vehicles covered by the new 2019 European Union standard made up about eight out of 10 trucks within the European fleet, with European brands holding most of the market share in this segment. Germany-based Volkswagen and Sweden’s Volvo had over half the market shares of European truck registrations covered by the adopted carbon dioxide standards in 2020. A 2019 forecast projected the adoption rate of new-energy heavy-duty trucks to reach 19 percent for long-haul freight by 2030. That same year, the production of hydrogen fuel cell and battery-electric trucks is expected to reach 10 percent but could climb to almost half the total production of heavy commercial vehicles by 2035. This trend illustrates that the heavy-duty segment is slowly shifting towards zero-emission, though charging availability remains a challenge for the industry. The European heavy-duty electric vehicle charging infrastructure market is projected to reach 1.5 million U.S. dollars in 2024. Germany is forecast to spearhead the sector, at some 4,300 charging points expected to be in the country by 2025.
This text provides general information. Statista assumes no liability for the information given being complete or correct. Due to varying update cycles, statistics can display more up-to-date data than referenced in the text. 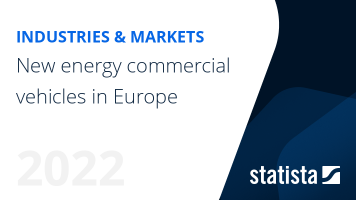 The most important key figures provide you with a compact summary of the topic of "New energy commercial vehicles in Europe" and take you straight to the corresponding statistics.