The first coronavirus (COVID-19) case in Tunisia was detected in March 2020, when a Tunisian man tested positive for the virus after returning from Italy. Afterward, despite the preventive measures put in place by the national government, including lockdown, curfews, travel restrictions, and the use of personal protective equipment, the virus rapidly spread in the country and caused the first death on March 19, 2020. Tunisia has been one of the most affected countries in Africa, according to official figures.

Tunisia started to vaccinate against COVID-19 on March 13, 2021. By June 2022, the country had administered over 13 million doses. Some vaccines were received through the United Nations-backed COVAX initiative, which aims at providing doses to all the countries of the world, particularly Africa. Further doses were directly donated by foreign countries. Following the dramatic surge in the number of cases and deaths during the third wave of COVID-19 infections in July 2021, Tunisia received donations from Algeria, Europe, China, and the United Arab Emirates, which allowed for an acceleration of the vaccination campaign. The country reached one of the highest vaccination rates in Africa.

As in the rest of the world, the pandemic had adverse consequences on economic growth. Tunisia's GDP fell by almost 20 percent in the second quarter of 2020 compared to the previous year, and all economic sectors were heavily impacted. The country’s business environment also suffered, with most companies reporting declines in sales a few months after the COVID-19 outbreak. Reduced business activities additionally affected the labor market, since many employees lost their job or had reduced working hours. As a result, the unemployment rate increased to 16.7 percent in 2020 compared to 15.13 percent the year before.

In Tunisia, the spread of the virus not only put the already fragile healthcare system under pressure but also caused political instability. The deteriorating health situation and the dissatisfaction with the government's handling of the pandemic led to violent protests, which resulted in a political crisis. In 2021, President Kais Saied suspended the parliament, dismissed Prime Minister Mechichi, and announced that he will rule by decree. Amidst the continuing protests, the President appointed Najla Bouden as Prime Minister, the first woman having this role in the Arab countries.
This text provides general information. Statista assumes no liability for the information given being complete or correct. Due to varying update cycles, statistics can display more up-to-date data than referenced in the text.

Mariam Saleh
Research Expert covering North Africa, specializing in the socio-economic environment of Algeria, Libya, Tunisia, and Morocco
Get in touch with us now
Published by Mariam Saleh, Nov 28, 2022 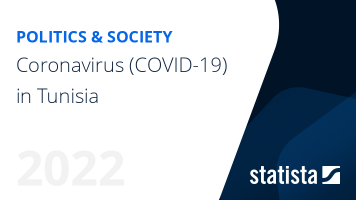 The most important key figures provide you with a compact summary of the topic of "Coronavirus (COVID-19) in Tunisia" and take you straight to the corresponding statistics.