Gardening is a popular pastime in the United Kingdom (UK). Not only do people practice it as a hobby and visit public gardens, but they also open their private gardens up to the public for visitation, for example, through the National Garden Scheme. This hobby became particularly important to those in the UK during the coronavirus (COVID-19) pandemic when lockdowns caused many to have to stay at home with limited access to leisure activities. In 2020, members of the public were surveyed on what the main benefits were of having access to a garden or outdoor space during COVID-19, and the majority stated that it “helped relieve stress and anxiety, contributing to [their] mental wellbeing”. Therefore, it is perhaps unsurprising that annual expenditure on gardening, plants, and flowers in the UK showed year-over-year growth in 2020, accounting for approximately 6.2 billion British pounds.

Who likes gardening in the UK?

Meanwhile, when it came to regional enjoyment of gardening in the UK, the North West proved to be the area that enjoyed gardening the most, while Greater London had the lowest amount of respondents that enjoyed gardening. The reason for this may be due to the smaller garden sizes in London compared to the rest of the UK. When looking at the cities and towns with the smallest average garden sizes, London came second in the ranking after the coastal city of Brighton.

How much do people spend on gardening in the UK?

Garden spending in the United Kingdom has increased relatively steadily since 2013, peaking in 2020 at the start of the coronavirus pandemic and reaching its highest levels in the third quarter of that year. But what do people spend this money on? In 2020, the garden category that adults in the UK spent the highest average amount on was renovations, at 241 British pounds. Meanwhile, the region that had the highest average weekly expenditure on horticultural goods, garden equipment, and plants was the South East, at four British pounds. Comparatively, those in London spent the least. When it came to specific gardening items people in the UK were willing to spend the most on, garden furniture, DIY equipment, and BBQ equipment were top of the list in July 2020.

Additionally, due to many shops and garden centers closing their doors to the public, it would appear that many people bought gardening items online during the pandemic in 2020. As a result, online gardening and home improvement product sales showed year-over-year growthin all categories.
This text provides general information. Statista assumes no liability for the information given being complete or correct. Due to varying update cycles, statistics can display more up-to-date data than referenced in the text.
Published by Statista Research Department, Feb 9, 2022

Total sales of garden products in the UK
4.29bn GBP

Most popular gardening products in the UK
Outdoor plants

Cities with the biggest average garden size in the UK 2021

Garden spending in the past year per adult in the UK 2021, by spend type

Share of the public in the UK that enjoy gardening 2020, by age

Cities with the smallest average garden size in the UK 2021

Impact of the coronavirus 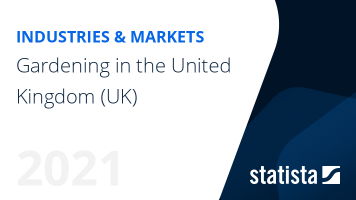 The most important key figures provide you with a compact summary of the topic of "Gardening in the United Kingdom (UK)" and take you straight to the corresponding statistics.