53k
74.6k
87k
88.9k
ISIS has seen its territorial "caliphate" shrink drastically over the past few months and the group has been especially weakened by the fall of Raqqa and Mosul. That has prompted an exodus with at least 5,600 of its foreign fighters returning to their home countries, according to a new report from the Soufan Center. 33 countries have reported arrivals over the last two years.

Following the liberation of important administrative centers such as Raqqa, 19,000 of the estimated 40,000 foreign fighters who joined the group from 110 countries have been identified, though what happened to most them remains unknown. 3,414 Russian fighters took up arms with ISIS and 400 have now returned home, as have 760 of Saudi Arabia's 3,244 fighters.

At least 5,000 individuals from across the European Union flocked to aid the group in creating its caliphate and at least 1,200 of them have now returned home. Out of all European countries, the United Kingdom has seen the highest number of returning fighters, 425. Seven of the estimated 129 American ISIS fighters have also returned to the United States. At this point, it is difficult to judge the threat level posed by these returnees, but countries are going to have to act quickly and formulate strategies to address it. 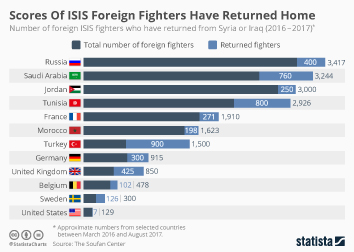 This chart shows the number of foreign ISIS fighters who have returned from Syria or Iraq.