40k
57k
41k
9.6k
The U.S. Department of Justice filed an antitrust lawsuit on Monday, seeking to block AT&T’s $85 billion takeover of media conglomerate Time Warner. In the complaint, the DOJ outlines several ways in which the proposed megadeal would stifle competition and ultimately harm consumers in the United States.

Referring to AT&T’s position as the largest provider of traditional subscription TV, the DOJ argues that an acquisition of Time Warner, which owns some of the country’s largest TV networks, would give the distributor AT&T too much control over the programming side of the TV business, providing them with the power and the incentive to use that power anticompetitively. In its complaint the DOJ assumes that, should the merger go through, “AT&T/DirecTV would hinder its rivals by forcing them to pay hundreds of millions of dollars more per year for Time Warner’s networks, and it would use its increased power to slow the industry’s transition to new and exciting video distribution models that provide greater choice for consumers. The proposed merger would result in fewer innovative offerings and higher bills for American families.”

In response to the DOJ’s complaint, AT&T has published a statement expressing the company’s confidence that the U.S. District Court will ultimately decide in its favor. “Today’s DOJ lawsuit is a radical and inexplicable departure from decades of antitrust precedent. Vertical mergers like this one are routinely approved because they benefit consumers without removing any competitor from the market. We see no legitimate reason for our merger to be treated differently", AT&T’s Senior Executive Vice President and General Counsel David R. MacAtee II stated, likely referring to its rival Comcast's acquisition of NBC Universal, which was greenlit by the F.C.C. and the Department of Justice in 2011, albeit under the Obama administration. 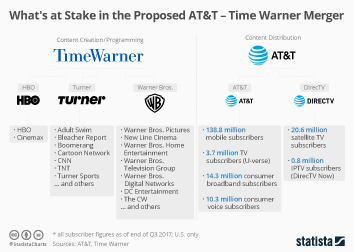 This chart provides an overview of the brands and assets that the proposed $85 billion merger between AT&T and Time Warner would bring together.