88.9k
Over the past couple of weeks, things went from bad to worse for pay-TV providers in the United States, after both Apple and Disney announced their own subscription-based video streaming services to launch this year. Already struggling to hold on to subscribers lured away by the likes of Netflix, Hulu and Amazon Prime, the last thing the pay-TV industry needs is two new heavyweight competitors with deep pockets and plenty of ambition.

According to Leichtman Research Group, the largest pay-TV providers in the United States, accounting for 95 percent of all subscribers, lost more than 2.85 million subscribers, collectively, in 2018, with satellite services seeing the biggest drop in customers (-2.4 million) and cable companies also losing 0.9 million subs. Part of the decline was offset by a rise in internet-delivered services such as Sling TV, but overall things are looking increasingly bleak for the pay-TV industry.

As the following chart shows, cord-cutting is really picking up pace, with net subscriber losses of the largest pay-TV providers growing from 125,000 in 2014 to 2.85 million last year, with total subscriber losses amounting to more than 5.5 million over the five-year period. At the same time, household penetration of SVOD services has grown from 47 percent to 69 percent between 2014 and 2018, indicating who is likely to blame for pay-TV’s losses. 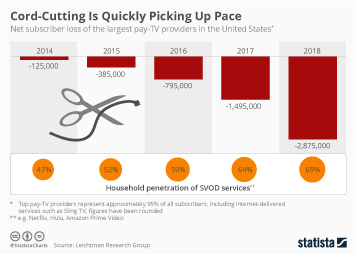 This chart shows net subscriber loss of the largest pay-TV providers in the United States.

Talks about a Verizon-Charter merger