Warren Buffett is next in line to become the longest-serving CEO in the S&P 500. Les Wexner, who has held the role as CEO for nearly six decades, is slated to step down from Victoria's Secret's parent company, L Brands.

He was best known for overseeing mall brands like Abercrombie & Fitch, Bath & Body Works, Limited Too, and, most notably, Victoria’s Secret. However, he was accused of perpetuating an unhealthy work environment during the #MeToo era and VS struggled to stay relevant through the body positive movement. Further, Wexner’s reputation became tarnished through his association with disgraced financier Jeffrey Epstein, the accused sexual predator who died while in prison this summer.

With Wexner stepping down, that makes Buffett, the longest-tenured CEO, according to Conference Board data cited by Business Insider. Buffett, 89, has been with Berkshire Hathaway for 50 years. After him, the longest-serving CEO is Alan B. Miller, who’s been with Universal Health Services for 42 years. James Herbert, the third in line, has been with First Republic Bank for 34 years. 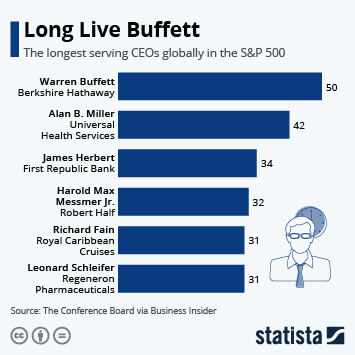 This chart shows the longest serving CEOs globally in the S&P 500.