EU officials are battling to save the summer holiday season and kick-start a tourism industry that has been paralysed by the ongoing pandemic. Tourism accounts for approximately 10 percent of Europe's economic output and supports millions of jobs. EU member states are now moving towards a phased reopening of borders (where it is safe to do so) with Germany and Austria agreeing to open their frontier with random checks until mid-June when free movement will resume.

The situation is causing a headache for people hoping to travel abroad this year but in some countries, that might actually not prove too much of a problem. According to Eurostat, many holidaymakers across Europe rarely leave their own countries anyway. In 2017, just over 90 percent of all trips in Spain and 87 percent of trips in France were domestic. Some people do need to get away, however.

In Belgium, it's a different story with 80 percent of trips happening abroad. Due to its geographic position bordering France, Luxembourg, Germany and the Netherlands, Belgians can easily travel to a whole host of other countries for holiday or business with very little effort. Brussels also enjoys a high-speed rail connection with London via the Channel Tunnel, making a quick escape to the UK another easy option for Belgians planning a holiday getaway.

Given the situation, however, it remains to be seen if Belgian travellers will be confined to Ostend, Bruges, Ghent and the Ardennnes this summer. According to the latest data from the Johns Hopkins University, Belgium has the most COVID-19 deaths per 100,000 inhabitants of any country as of May 14, 2020. 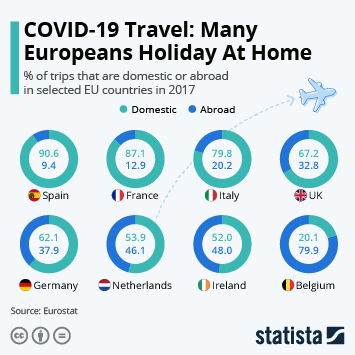 This chart shows the percentage of trips that were domestic or abroad in selected EU countries in 2017.