With more than 85 percent of the population having access to social media, and an increasing reach and usage of internet via mobile phones, Brazilians are simply wired to messaging apps. The popularity of these platforms in the country has long crossed the lines of personal communications to turn them into a tool for e-commerce and brand communication, spreading content, and participating in online groups and channels (and thus playing a central role in the country’s political debates).

How do people use chat apps in Brazil?

Sending instant messages is the main online activity for 93 percent of Brazilian internet users, followed by the exchange of voice or video calls, and general use of social media. Additionally, keeping in touch with friends and family is listed as the primary reason for accessing social media in Brazil. Meanwhile, the usage of SMS among Brazilians decreases year after year.

With flexibility and a little bit of “jeitinho” (roughly translated as the “little Brazilian way to improvise solutions”), messaging apps became an important tool for communicating with brands and companies. Additionally, new tools like groups and channels are also growing in popularity, turning messaging apps into actual distribution platforms for all kinds of content. With a large public plus a well-established and dynamic market, Brazil is the natural bet for all aspiring companies from all around the world.

What are the popular social messaging apps in Brazil?

Despite the increase in options for the Brazilian public, Meta-owned applications have a long-and-strong established hegemony in the country regarding social media and messaging apps. WhatsApp is used by more than 90 percent of Brazilians, being kindly nicknamed ‘zap-zap’ by local users. Thanks to its success, text messaging has become part of the Brazilian lifestyle, being the first among these applications to offer a business spin-off for commercial communication.

However, despite its solid ground, WhatsApp’s growth is seemingly stagnated or declining. Notably, all of WhatsApp’s competitors have experienced a surge in growth during the last quarter of 2020 and the first quarter of 2021, after a review of the application’s privacy policy. This seems to have particularly favored Telegram and Signal, which are now installed on more than 60 percent of smartphones in the country, becoming the Meta-owned app’s biggest competitor. Still, most apps also seem to have either reached their peak or experienced a major decline in their audiences.

The picture is even more grim for Facebook Messenger, also owned by Meta, and Snapchat which also seems to be facing its lowest point in Brazil so far. Meanwhile, Discord seemingly established its own niche among the gaming community. Still, a more competitive environment is not the only problem to be faced by these companies.

The centrality of messaging apps and social media in the country’s lifestyle has also greatly affected it's political landscape. While the overall political orientation of most of these app’s users leans towards a right-wing direction, the polarized political atmosphere in Brazil made social media users stop talking about politics on these platforms, especially those leaning toward a left-wing spectrum. Meanwhile, the biggest Telegram channel in Brazil belongs to the incumbent president Jair Messias Bolsonaro, showing an interesting dynamic in the usage and penetration of these applications among different political groups.

Meanwhile, the Brazilian public has become more aware and demanding of the responsibility of social platforms in general towards the political landscape: around 81 percent of a March 2022 survey in Brazil agreed that social media platforms and messaging apps should remove fake news content, and more than half of the respondents stated that messaging apps should be suspended if they disobeyed court orders to avoid the spread of fake news.
This text provides general information. Statista assumes no liability for the information given being complete or correct. Due to varying update cycles, statistics can display more up-to-date data than referenced in the text.

Tiago Bianchi
Research expert covering internet & gaming in Latin America and Spain
Get in touch with us now
Published by Tiago Bianchi, Nov 11, 2022

Penetration of voice messages or video calls in Brazil
82%

Most popular apps on smartphone home screens in Brazil 2022 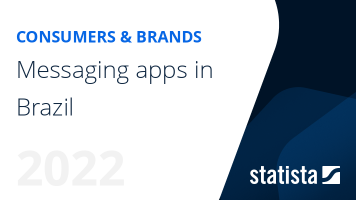 The most important key figures provide you with a compact summary of the topic of "Messaging apps in Brazil" and take you straight to the corresponding statistics.