Published by C. Textor, Jan 3, 2022
The Chinese Communist Party (CCP) is the sole governing party of the People's Republic of China. In June 2021, its membership reached 95.1 million, representing about 6.7 percent of the Chinese population. The CCP pervades all parts of the Chinese society. In 2021, the number of CCP organizations at grass-roots level, which have been established in nearly all government institutions, state-owned and private companies, as well as social organizations, exceeded 4.8 million.

Evolution of the CCP

The CCP was founded in 1921 and expanded its power base quickly in Chinese society. After the defeat of the Kuomintang and the foundation of the People's Republic of China in 1949, the CCP governed as the only ruling party and still governs the country today. Despite this continuity, the party's ideology has been adjusted and amended several times. Moving away from Marxism-Leninism, which is still claimed to be the party's core theory, the most profound change in party ideology has been the gradual integration of economic market principles during the reform and opening up era beginning in 1978. Today, the political system of China is defined by the CCP as "socialism with Chinese characteristics".

People's support for the CCP

China's impressive economic success and political stability over the last three decades has had a positive effect on the lives of a great majority of the Chinese people and is largely responsible for the CCP's wide approval among the Chinese populace. In view of these successes, political concerns over democracy or human rights are of secondary importance in the eyes of a Chinese majority. A large part of the Chinese population agrees that their political system represents its citizens well, and membership in the CCP is still popular among the people with only around one out of eight membership applications accepted by the party.

Against the backdrop of growing U.S.-Chinese tensions, people from mainland China are showing increasing national solidarity, and support for the CCP under its president Xi Jinping is growing. In this context, there is no sign of change towards the democratic system that was so much hoped for by Western political thinkers in the past.

In the following 4 chapters, you will quickly find the 19 most important statistics relating to "Chinese Communist Party".

Statistics on the topic
Number of CCP members in China
96.7m
Annual increase in CCP members
3.7%
CCP members as share of the Chinese population
6.85%

The most important key figures provide you with a compact summary of the topic of "Chinese Communist Party" and take you straight to the corresponding statistics.

Political division in the United States 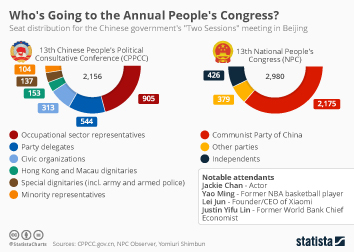