Published by
M. Shahbandeh,
Apr 19, 2021
On January 1, 2015, a new law was passed in California which would require farmers in California and other U.S. Californian-importing states to put their hens in larger cases with enough space to move around and stretch their wings. The animal welfare law is expected to cause higher prices due to increasing production costs. The Golden State, California, was rated among the leading 10 U.S. states based on the number of egg- laying hens. The largest number of laying hens was counted in Iowa, followed by Ohio and Indiana, respectively. The total production of eggs was estimated at over 111 billion in the United States in 2020.

Eggs are provided in a wide array of forms in the food industry: besides shell eggs, you may find dried or powdered eggs. Most produced shell eggs go to retail in the U.S. In the retail market, the fresh egg department was dominated by private labels. The brands Eggland’s Best and Great Day Farmers Market followed with some distance. In 2020, the retail price for a dozen eggs in the United States was 1.48 U.S. dollars. Egg prices in the United States peaked in 2015, when a dozen eggs cost 2.75 U.S. dollars on average.

On the consumer side, it is projected that the per capita consumption of eggs will reach 278.9 in 2018. The latest consumer data provided by the Experian Simmons National Consumer Study revealed that over 94 percent of American households use eggs. In 2019, consumers in the Western United States spent an average of about 69 U.S. dollars on eggs over the course of the year. The Midwestern United States had the lowest average expenditure on eggs in that year.

In the following 4 chapters, you will quickly find the 20 most important statistics relating to "Egg industry in the U.S. ".

The most important key figures provide you with a compact summary of the topic of "Egg industry in the U.S. " and take you straight to the corresponding statistics. 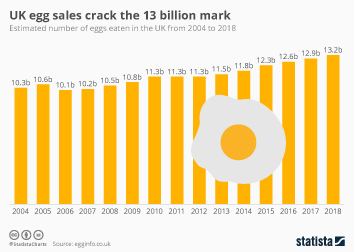