Published by
Amna Puri-Mirza,
Dec 16, 2020
The month of Ramadan is the ninth month of the Islamic lunar calendar. During the month of Ramadan, 1.6 billion Muslims worldwide consider it their religious duty to fast from sunrise to sunset. They abstain from all so-called worldly desires such as eating, drinking, smoking, and sexual activities. This time is used by the majority of Muslims to reboot their relationship with God, their lifestyle, and their health. The majority of Muslims plan to increase their religious worship, pray more regularly, and commit more ‘good deeds’. During this time many reconsider their lifestyle choices: some plan to work out more often during their fast to better their physical wellbeing.
However, studies have shown that fasting people tend to increase their calorie intake during the month of Ramadan. Muslims, especially those living in Islamic regions, tend to socialize and eat out in social gatherings more often between sunset and sunrise the next day.

As the Islamic lunar calendar is eleven days shorter than the solar Gregorian calendar, Ramadan shifts every year and is earlier by eleven days. In 2020, Ramadan is calculated to take place from April 24th to May 23rd. The length of the fasting day varies from location to location, depending on the latitude of each location. This year, Ramadan will take place during the spring of the northern hemisphere, resulting in longer fasting hours in northern regions and shorter fasting hours in the southern hemisphere.

In the Middle Eastern and North African region, school, business, and working hours are traditionally reduced. People spend more time at home with their families, going to their mosque, praying, and other religious duties such as reading the Quran. However, Ramadan is also prime time for TV consumption, as viewing increases by a significant amount. Major new TV series and films are released during this month, which also affects advertisement sales and prices.

Ramadan is the period that sees the largest number of pilgrims going to Mecca to perform Umrah. This is a minor pilgrimage, which can be performed all year around. The end of Ramadan is marked with a three-day festival called Eid al Fitr. Muslims who have fasted donate the equivalent of 2.5 kilograms of wheat or rice per person in their local currency to charity, exchange gifts with loved ones, and celebrate with feasts. Whilst Ramadan and Eid al Fitr are very special times of the year for the Muslim community, it is considered second in importance to Eid al Adha, the Islamic festival of sacrifice that marks the end of Hajj (the main Islamic pilgrimage which takes place only once a year).

The most important key figures provide you with a compact summary of the topic of "Ramadan " and take you straight to the corresponding statistics.

Islam in the UK

Islam in the Netherlands 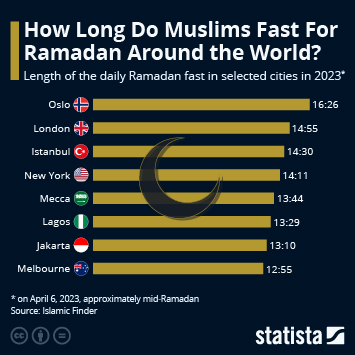