Published by Statista Research Department, Jun 24, 2021
Hispanic or Latino ethnicity is defined as being "a person of Cuban, Mexican, Puerto Rican, South or Central American, or other Spanish culture or origin regardless of race." Hispanic people are the largest minority in the United States. In 2019, about 60.5 million people of Hispanic origin were living in the U.S. By 2060, it is projected that the Hispanic population will reach the 111.22 million mark, a significant factor in U.S. population growth. As of 2019, about 13.17 million families of Hispanic descent were residing in the United States.

In recent years, the fastest Hispanic population growth has tended to come in areas with a relatively small number of Latinos. Thanks to a boom in Bakken shale oil production, North Dakota has some of the fastest-growing counties by Latino population in the United States. In 2019, there were 30,490 people with Hispanic descent living in North Dakota. California, on the contrary, with more than 15.5 million people in 2019, has been home to the largest Latino diaspora for many decades, ahead of such states as Texas and Florida.

Most Hispanics are bilingual, speaking both Spanish and English. About 36 percent of foreign-born adults living in the U.S. said they could speak English “very well” in 2018. At the same time, roughly 43 percent stated that they spoke English less than “very well”.

Language proficiency affects employability and income level. This could partly be the reason for the relatively high unemployment rate among the people with Hispanic ethnicity, which was 10.4 percent in 2020. In comparison, the average U.S. unemployment rate was 8.1 percent in the same year. In 2019, the median weekly earnings of a Latino full-time employee amounted to 706 U.S. dollars in the United States, which was below the national average.

In the following 5 chapters, you will quickly find the 28 most important statistics relating to "Hispanics in the United States".

The most important key figures provide you with a compact summary of the topic of "Hispanics in the United States" and take you straight to the corresponding statistics.

Hispanic media in the U.S.

Hispanics in the U.S.: Shopping Behavior

Internet usage of Hispanics in the United States

Illegal immigration in the United States 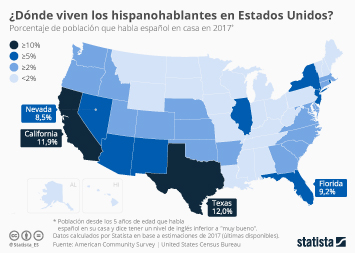 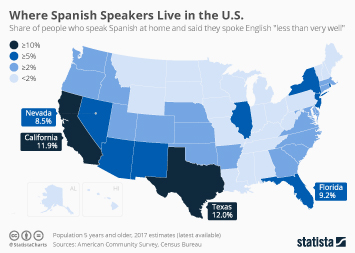 spanish speaker in the U.S. by state