The United States is home to the largest population of Hispanic and Latino people outside of Latin America. These groups make up a significant portion of the U.S. population and contribute greatly to the culture in many regions. For years the Hispanic population has been underrepresented in everything from politics to media but as the population grows, they are becoming more and more influential across all aspects of U.S. society.
Given the differences in language and culture, the Hispanic community in the U.S. tends to consume media in slightly differently to other ethnic groups. For example, Hispanic children are less likely to own a laptop or computer than white children but are more likely to have a television in their home. Hispanics tend to be more likely to use audio streaming services than white Americans, and more Hispanics watch video streaming services than other ethnic groups. Given these figures, it seems that Hispanic consumers are adopting new technologies at a faster pace than other ethnic groups and are finding it easier to leave behind classic forms of media, such as newspapers.

When it comes to television, Hispanic consumers watch less than their white/Caucasian and black/African-American counterparts. Despite this lower average viewership, a staggering 73 percent of Hispanic adults currently subscribe to or have access to a Netflix account, with 32 percent of those stating that they use the service several times per day. And it’s not just Netflix that is popular; Hispanics are significantly more likely to watch television on Hulu than other ethnic groups, again indicating that they have been quick to adopt new media platforms. Given that a significant portion of the ethnic group speaks Spanish, the programs that Hispanic consumers tend to view are also different from those of other ethnic groups.

Channels like Univision and Telemundo are wildly popular Spanish-language programming options among these groups in the United States. Over 75 percent of TV newsrooms employees are white, encouraging Spanish consumers to find sources for news that better represent their needs and concerns. Social media, Hispanic broadcasts, Hispanic newspapers, and Hispanic websites were their most likely sources for news as of 2017, and, in general, Hispanic consumers had a low level of trust in non-Hispanic media sources.

Music serves as an important means of expression and cultural identity for many different ethnic groups across the country, and the Hispanic population seem to be particularly active music consumers. Around 85 percent of Hispanics listen to Spanish-language music in the United States. FM radio remains the most popular music source, but platforms such as Pandora, Youtube Music, and Spotify are also used on a regular basis by Hispanic consumers.

With the Hispanic population expected to grow from 60 million to over 140 million between 2015 and 2050, its clear that the ethnic group will have a growing influence on media in the United States. On average, they seem less reliant on traditional media sources than other ethnic groups and interested in Spanish-language centric media, so in order to appeal to this group, media companies will have to find ways to better cater to the desires of the Hispanic population.
This text provides general information. Statista assumes no liability for the information given being complete or correct. Due to varying update cycles, statistics can display more up-to-date data than referenced in the text.

TV households with selected devices in the U.S. 2020, by ethnicity

Share of Hispanics who use audio streaming services in the U.S. 2018
45%

Most popular video content provider among Hispanics in the U.S. 2017
Netflix

Radio reach among Hispanics in the U.S. 2021, by age and gender

Trust in newspapers in the U.S. 2022, by ethnicity 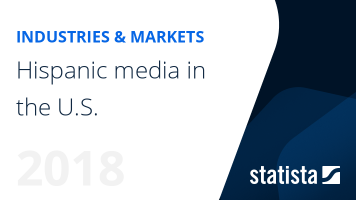 Go to report Hispanic media in the U.S.
Top Seller

The most important key figures provide you with a compact summary of the topic of "Hispanic media in the U.S." and take you straight to the corresponding statistics.