Published by
Bruna Alves,
Dec 3, 2021
Energy prices are largely determined by production volumes of raw materials and their demand. In 2020, an unprecedented drop in demand following the COVID-19 outbreak caused energy commodity prices to plummet to record lows. Roughly a year later, with an energy supply shortage hitting the world as the global ‘post-pandemic’ economic recovery gained pace, natural gas and electricity prices in the European Union skyrocketed to record levels and are expected to keep rising. Nevertheless, other factors – such as taxes and distribution and maintenance costs – also impact energy prices within the EU.

Industrial customers typically have to pay less for electricity than residential users, as electricity can be transported at higher voltages, thus reducing transmission costs. Further, for large industrial consumers, prices are often negotiated at wholesale, rather than retail markets. In 2020, Sweden had some of the lowest electricity prices for industries in the EU.

Much like electricity prices, household natural gas prices in the EU were consistently higher than industrial prices. As natural gas is one of the leading sources of electricity in the EU, its price strongly influences the price of electricity in the region. In 2020, Sweden, the Netherlands, and Portugal were amongst the European countries with the highest household natural gas prices. The tax contribution was also behind the high prices in the latter two countries. Meanwhile, in Sweden, distribution costs exerted the highest influence.

In the following 6 chapters, you will quickly find the 24 most important statistics relating to "Energy prices in the EU".

The most important key figures provide you with a compact summary of the topic of "Energy prices in the EU" and take you straight to the corresponding statistics.

Energy prices in the UK

Energy prices in the U.S. 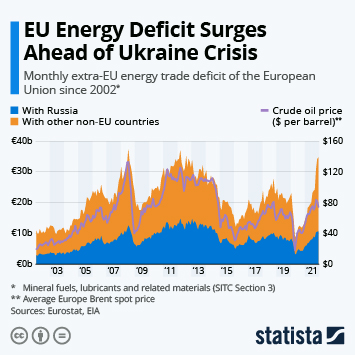