"Parties are unions of citizens which continuously or for a long time have influence over the political decision-making for the ambit of the federation or a state and want to play a part in the representation of the people in the German Parliament [Bundestag] or the state parliament[...]", according to the German law on political parties. The popularity of the parties is measured with the so-called Sunday question about federal elections.
The political parties with the largest membership numbers in Germany are SPD and CDU. Besides the social and Christian democrats, the Green Party, Left Party, FDP and AfD all play an active role in Germany's political landscape. In terms of average age among party members, the larger parties are very similar. The highest share of female members in German political parties can be found in the Green Party, at almost 41 percent.

The main goal of most of the larger parties is to provide governmental structure on a federal state or national level. The current German government is ruled by the CDU/ CSU coalition and SPD. Federal states in Germany usually also have party coalitions. States with coalitions formed between the SPD and CDU have the most votes in the Federal Council (Bundesrat) at this time.
Besides government financing, donations are also an important source of income for political parties. Large donations exceeding 50 thousand euros should immediately be reported to the President of the German Parliament and information is published afterwards to be publicly accessible. Donations between 10 thousand and 50 thousand euros are reported and made public only after a longer period of time in party statements of accounts.

This text provides general information. Statista assumes no liability for the information given being complete or correct. Due to varying update cycles, statistics can display more up-to-date data than referenced in the text.
Published by Statista Research Department, Jan 16, 2023

Party with the most members
SPD

Share of women among political party members in Germany 2019

Sum of received large donations for political parties in Germany 2022 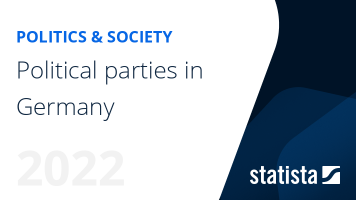 The most important key figures provide you with a compact summary of the topic of "Political parties in Germany" and take you straight to the corresponding statistics.