Published by
Dominique Petruzzi,
Apr 13, 2022
Kimberly-Clark is a multinational corporation that primarily produces personal care and medical products, the greater part of which are paper based, for example, bath and facial tissues, feminine hygiene products, and disposable diapers. Established in the United States in the late 19th century, Kimberly-Clark has expanded to become one of the leading household and personal care companies in the world. Some its most widely recognized brands include Cottonelle, Huggies, Kotex, and Kleenex.

Kimberly-Clark, which specializes in household staples such as sanitary napkins and bath tissue, has experienced a stable level of revenue in the past decade, generating over 19 billion U.S. dollars in 2021. The company has three major business segments: personal care, consumer tissue, and Kimberly-Clark professional. The largest of these by far is the personal care segment, which accounted for more than half of Kimberly-Clark’s overall revenue in 2021. In the same period, the K-C-Professional segment made around three billion U.S. dollars in net sales. One Kimberly-Clark product that shows particular promise in the future is professional tissue paper. This product is expected to generate about 4.6 billion dollars in sales by 2024.
Some of Kimberly-Clark’s brands, such as Kotex and Kleenex, have been fixtures in American households since the 1920s and reached an almost iconic status. Although there are dozens of facial tissue brands on the market, Kleenex is undoubtedly the most popular among American consumers to the point that the name Kleenex has become synonymous with tissues in general.

In the following 4 chapters, you will quickly find the 28 most important statistics relating to "Kimberly-Clark ". 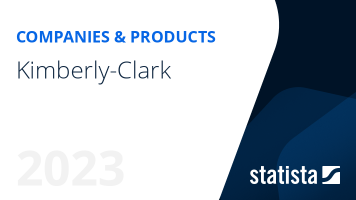 The most important key figures provide you with a compact summary of the topic of "Kimberly-Clark " and take you straight to the corresponding statistics.