Regarding the state of health among citizens of Myanmar, there are differing levels. Myanmar has made some progress in achieving its Millennium Development Goals, in accordance with the United Nations Millennium Declaration, signed in 2000. However, it struggled to attain several of its targets for 2015. There have been constant fluctuations in the immunization of children aged two years and below against measles and DPT. Cholera cases also increased throughout the country and had one of the highest incidence rates of all the Asian countries.

With its relatively recent democratic transition from a military rule, the Southeast Asian nation has attempted to make progress in reforming its healthcare system with varying results. Despite increases in funding, the country still fell behind other ASEAN nations dramatically in terms of its health expenditure. Additionally, health expenditure still only accounted for under five percent of the nation’s GDP. Nevertheless, the number of hospitals has increased along with the number of doctors, resulting in the decrease of the average duration of hospital stays. Despite the improvement in hospital infrastructure, health expenditure per capita has increased. Although out of pocket costs have reduced from the onset of 2015, they still remained higher than the global average. Yet another challenge resided with the drastic drop in the number of midwives, nurses, and dental surgeons. Although Myanmar has undoubtedly improved its health system throughout recent years, there still remains critical issues which the nation must address if it is to carry on with further improvements.

In the following 5 chapters, you will quickly find the 29 most important statistics relating to "Health in Myanmar".

The most important key figures provide you with a compact summary of the topic of "Health in Myanmar" and take you straight to the corresponding statistics.

State of health in the Asia-Pacific region

Coronavirus (COVID-19) in the Asia-Pacific region 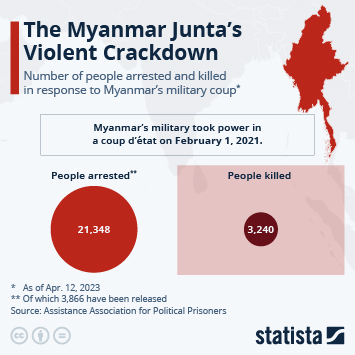 arrests and deaths in response to Myanmar coup