Published by
Lucie Jeudy,
Jun 16, 2022
With a recession of approximatively eight percent, the French economy was strongly impacted by the coronavirus (COVID-19) pandemic. In order to avoid rising unemployment, closure of companies and thus a lasting recession, the French state intervened massively on the market. As part of the stimulus package initiated at the beginning of the crisis in March 2020, the French government developed short-time working to reduce the payroll of companies and guaranteed a zero-interest loan to ensure sufficient liquidity for companies to pay their charges and suppliers. By 2021, France's real GDP had increased by about seven percent compared to the previous year.

In 2021, the French state budget amounted to more than 400 billion euros. That same year, national education was the fourth largest public finance expenditure item with more than 77 billion euros invested.
Social spending, including unemployment insurance payments, amounted to 31 percent of the French GDP in 2019. Other expenditure in the framework of allowances allocated in France include aid for the elderly, to people with disabilities or for childcare.

Although the economy is rapidly liberalizing in France, the national economic system is still based on the principle of the welfare state, which intervenes regularly in the country's economy and finances to ensure that social services are developed for the well-being of its citizens.
But this model is very expensive, the country keeps recording high debt levels. In 2021, the public debt in France reached 117.8 percent of the GDP, two points higher than in 2020, and 20 points higher than in 2019. However, France can take advantage of a relatively low interest rate in 2020, allowing it to invest in both the recovery and the ecological transition, as Bruno Lemaire, the Minister of the Economy and Finance, stated when presenting the 2021 budget. Interest payments on debt are at their lowest since 2010.

In the following 5 chapters, you will quickly find the 32 most important statistics relating to "Public spending in France".

Statistics on the topic
Total public spending in France
566.64bn EUR
First category of public budget spending
Financial commitments of the State
Public debt of France (as a percentage of the GDP)
146% 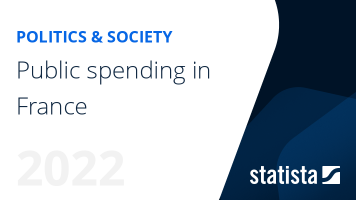 The most important key figures provide you with a compact summary of the topic of "Public spending in France" and take you straight to the corresponding statistics.

Salary of politicians and civil servants

Investments and alternative finance in France