Published by Statista Research Department, Oct 20, 2021
A mortgage is a medium- to long-term loan taken out to purchase, build, or renovate a property or land, secured by a lien on the property. In general, the lender approves an amount based on the value of the property and the borrower's creditworthiness. Borrowers receive a lump sum which needs to be repaid in installments at fixed or variable interest rates. A mortgage is a key financial instrument for a house purchase. Due to a rather high homeownership rate, the outstanding value of mortgage lending in Italy reached approximately 392 billion euros in 2020, making it one of the countries with the highest value of outstanding mortgage loans in Europe.
According to a survey from 2020, one in five Italian households were repaying a mortgage and one in two house purchases were backed by a mortgage loan. Mortgage loans granted in Italy increased more than twofold since 2013, reaching a total value of 36 billion euros in 2020. That year, the average mortgage loan for house purchase amounted to 131.5 thousand euros and had an average duration of 23.5 years. Figures, however, vary significantly across regions. The majority of mortgage loans were registered in the north-west of the country, which accounted for nearly 40 percent of the total loans value. On the other hand, the average mortgage loan was highest in the center of the country. Similarly, duration, average installment, and interest rates also differed according to the region.

In the following 4 chapters, you will quickly find the 22 most important statistics relating to "Mortgages in Italy". 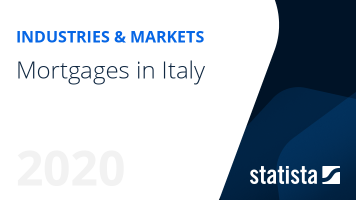 The most important key figures provide you with a compact summary of the topic of "Mortgages in Italy" and take you straight to the corresponding statistics.

Mortgages in the UK

The real estate market in Europe