The petrochemical industry converts raw materials from oil refining and gas processing into a wide range of products. These include plastics, synthetic fibers, fertilizers, adhesives, dyes, detergents, and synthetic paints and coatings. In 2020, petrochemicals accounted for more than 16 percent of the oil demand in the OECD. In 2021, the market value of petrochemicals reached 556 billion U.S. dollars.

How is the petrochemical industry structured?

The petrochemical sector can be roughly divided into upstream and downstream processing. Upstream industries convert feedstocks such as naphtha or natural gas into basic petrochemicals, namely olefins, aromatics, and methanol. Olefins include ethylene, propylene, and butadiene, while aromatics comprise benzene, toluene, and xylene. Ethylene is the most widely produced basic petrochemical worldwide. In 2021, the global production capacity of ethylene amounted to 214 million metric tons.

Downstream industries use the basic petrochemicals produced in upstream industries as inputs and convert them into finished products such as plastics or synthetic fibers. For instance, a major part of ethylene production is used to manufacture polyethylene, a common plastic material that accounts for roughly 30 percent of global thermoplastic production. The market value of polyethylene stood at 163 billion U.S. dollars in 2021 and is expected to reach almost 200 billion by 2029.

The production capacity of petrochemicals worldwide reached almost 2.3 billion metric tons in 2021. By 2030, it is expected to grow significantly, with China, India, and Iran the countries with the largest petrochemical capacity additions announced or planned. China alone plans to add an additional capacity of 134 million metric tons per year, dominating the market in the medium term.

Likewise, forecasts point to an increase in the petrochemical market in the next years. By 2030, the petrochemical industry’s global market value is expected to reach over one trillion U.S. dollars. The growing demand for these products, along with a decline in the consumption of fossil-derived liquid fuels in the transportation sector, could make petrochemicals the largest driver for oil demand in the near future.
This text provides general information. Statista assumes no liability for the information given being complete or correct. Due to varying update cycles, statistics can display more up-to-date data than referenced in the text.
Published by Lucía Fernández, Jul 13, 2022 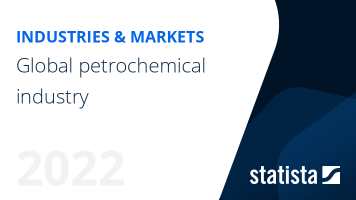 The most important key figures provide you with a compact summary of the topic of "Petrochemical industry worldwide" and take you straight to the corresponding statistics.