Mexico is, by far, the largest pay TV market in Latin America. According to estimates, the North American country was home to approximately 19.6 million subscribers in 2021, more than Brazil and Chile combined. The massive user base is forecast to continue to expand – which helps to explain the constant growth of the segment throughout recent years. Between 2014 and 2021, pay TV revenue in Mexico more than doubled, surpassing 125 billion Mexican pesos in the latter year. The telecommunication service is so popular that almost half of all Mexican TV households had access to pay TV as of April 2021.

Two companies dominate the market. Altogether, Grupo Televisa and Megacable accounted for over 80 percent of all pay TV subscriptions in Mexico at the end of 2020. Televisa alone held a share of almost two-thirds of the user base – the conglomerate co-controls Sky alongside AT&T in Mexico, the Dominican Republic, and Central America. Perhaps unsurprisingly, all four companies – Televisa, AT&T, their joint venture Sky México, and Megacable – were among the top 10 media and telecommunications companies in Mexico in 2020, the latest ranking available. But their impressive subscribership might not be the most satisfied. During a mid-2021 survey, Totalplay was the best-evaluated pay TV provider in Mexico. The brand belongs to a holding known as Grupo Salinas, whose operations span beyond the realm of media and telco and include finances, transportation, and sports, among others.

Like everywhere else, online content poses an unparalleled challenge to legacy media also in Mexico. The share of Mexican internet users watching over-the-top (OTT) TV went from 79 percent in 2015 to 88 percent in 2021. And the global trend of streaming expansion might be more than a cultural shift. Only seven percent of viewers surveyed in 2021 said they watched content exclusively online, whereas over half of respondents stated that price was a reason for not subscribing to pay TV in Mexico. Besides costing more than most subscription video-on-demand (SVOD) services, pay TV relies on an abundance of channels – which does not necessarily translate into a profusion of content for the final user. More than half of the people interviewed later in 2021 admitted they did not know how many channels were part of their pay TV plan. The unfamiliarity with all the products sold will either make it easier to keep commercializing them or harder to charge more than a competing business model offering thousands of series and films instead of hundreds of channels.
This text provides general information. Statista assumes no liability for the information given being complete or correct. Due to varying update cycles, statistics can display more up-to-date data than referenced in the text. 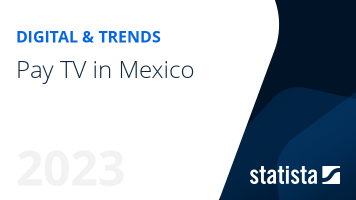 The most important key figures provide you with a compact summary of the topic of "Pay TV in Mexico" and take you straight to the corresponding statistics.