88.9k
Rigetti, a quantum computing startup, is expected to release a 128-qubit computing system at some point in 2019, a major advancement in the quantum arena putting the field one step closer to achieving quantum advantage and supremacy.

Quantum advantage refers to the moment when a quantum computer can compute hundreds or thousands of times faster than a classical computer, while quantum supremacy is achieved once quantum computers are powerful enough to complete calculations that classical supercomputers can’t perform at all. Building computing systems with higher qubits is the backbone of how quantum computing will achieve both end goals. The field is moving rapidly. In 1998, researchers at IBM, Oxford, Berkeley, Stanford, and MIT produced a 2-qubit computing system. By 2018 Google confirmed that it was able to produce a 72-qubit computing system. Rigetti announced it would be going further than that, releasing a 128-qubit system within the year.

A qubit takes the idea of a bit of information, which can only exist in one state or another and can only be processed one bit at a time and complicates it by making it two-dimensional. Qubits can be processed simultaneously and exist in multiple states at the same time. That idea is called superposition and it means that qubits can hold a zero, a one, or any combination of both zero and one at the same time, giving them the potential to be exponentially faster and more efficient than binary systems.

Our partners at BCI Summit are hosting a private event from May 10th to the 12th where C-suite investors, family offices and corporations active in the disruptive technology space can network and learn from each other as well as meet global founders. For registration information, sign up here: BCI Summit. 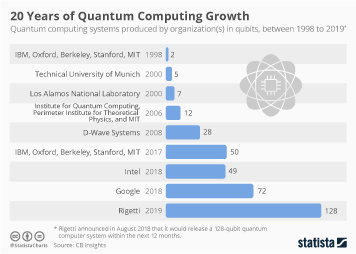 This chart shows the quantum computing systems produced by organization(s) in qubits, between 1998 to 2019.