88.9k
The U.S. Department of Commerce added Huawei to a trade blacklist that prevents American based companies from buying parts and components from Huawei without explicit approval from the government. The DOC has granted a temporary export license to the company for 90 days, allowing Huawei to continue critical support to U.S. companies, during the transition time.

As President Trump doubles down and expands his trade war with China, many companies are getting caught in the crossfire. Trouble began to stir when President Trump accused Huawei of allegedly being able to potentially spy on Americans through the development of 5G technology. Huawei’s Chief Financial Officer, the daughter of the company’s CEO, has also been under house arrest in Canada on a warrant by the U.S since December for allegedly violating U.S. trade sanctions with Iran.

President Trump called on allies to ban Huawei from winning government telecommunications contracts, a call that few allies heeded. Now the administration has gone a step further through the DOC action. Companies, like Google and Microsoft, can no longer provide access to software and applications for Huawei products. For Google, this includes essential apps like Gmail, Google Maps, and YouTube.

According to Statista’s Global Consumer Survey, Europeans use Huawei smartphones at a much higher rate than Americans. Almost nobody in the U.S. has a Huawei smartphone, while nearly one in five people in Spain and one in four in Italy report using Huawei as their go-to smartphone. The company is reportedly developing its own operating system to combat the ban, a tough venture in an industry dominated by two behemoths. 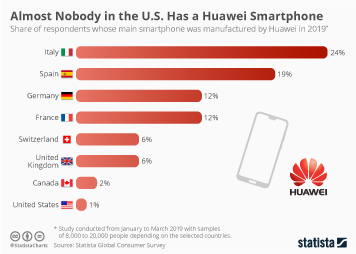 Share of respondents whose main smartphone was manufactured by Huawei in 2019.