A large share of countries around the world are now using Chinese AI surveillance technology, including facial recognition technology, in full or in part. This is according to a report by Carnegie Endowment for International Peace. Many countries are combining Chinese tech with U.S.-made surveillance tech, among them the U.S. and China themselves, but also India, Australia, Brazil and several European countries. Many countries in Latin America, South-East Asia, Africa and the Middle East are relying on Chinese technology alone after participating in the Belt and Road initiative, as are Japan, Italy and the Netherlands.

China is not only a prominent user of AI-powered surveillance and facial recognition but also a big producer and exporter of the technology. The country uses surveillance and AI widely and its so-called social credit system has caused dystopian fears around the world. A concern that is more immediate to importers of Chinese surveillance technology is, however, the potential of Chinese businesses not being independent enough from their government to ensure that there are no backdoors in any products through which unauthorized parties might gain access to applications.

According to the report, Huawei – a company which has been banned from several countries because of similar fears in connection to 5G technology – is also supplying AI surveillance technology to 50 countries in the world. U.S. companies IBM, Palantir and Cisco were supplying eleven, nine and six countries, respectively. 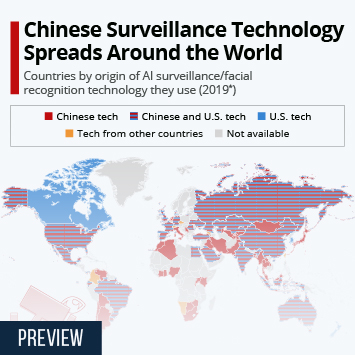 This chart shows the where AI surveillance technology used around the world originates.