A lurking knee injury, a global health crisis and a wayward tennis ball fired in frustration – that’s what it took to end one of the most remarkable streaks in tennis history at the 2020 US Open. Following Novak Djokovic's shock default for hitting a lineswomen, the US Open semifinals marked the first time since 2004 that neither of the “Big Three”, i.e. Roger Federer, Rafael Nadal and Novak Djokovic, featured in the round of the last four at one of tennis’ biggest occasions. Back then, three Argentinians (David Nalbandian, Gastón Gaudio and Guillermo Coria) and one Englishman (Tim Henman) had reached the semifinal of the French Open and little did we know that it marked the dawn of a new era in men’s professional tennis.

In the end, Dominic Thiem emerged victorious from last year’s US Open, putting an end to a remarkable streak that saw Djokovic, Nadal and Federer win 13 consecutive Grand Slam titles between them, after Stan Wawrinka had become the last player to break through their dominance in 2016. Things quickly returned to "normal" after Thiem's maiden Grand Slam title, however, as Novak Djokovic came back to win the first two majors of 2021.

As the following chart illustrates, the Big Three won 58 of the past 69 Grand Slam tournaments, with Andy Murray and Stan Wawrinka the only other players to notch multiple (i.e. three) wins during the triumvirate’s decade-spanning reign over tennis’ most prestigious events. With Federer, Nadal and Djokovic at 20, 20 and 19 career Grand Slam titles, respectively, Djokovic, the youngest of the three at 34, looks most likely to end up with the most titles of any male player when the "Age of the Big Three" eventually ends. 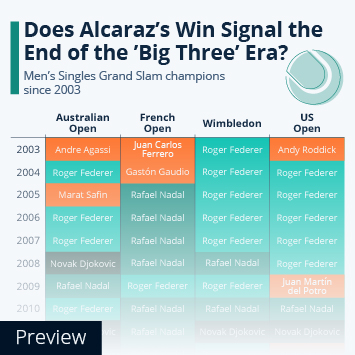