Advertisers across the world are quickly pulling their ads from Facebook following the creation of the “Stop Hate for Profit” boycott, which aims to highlight the damaging effects of hate speech on the website. More than 160 companies have joined the campaign, including Verizon, Target, HP, Unilever and other global brands. Data continues to show how Facebook has acted as a safe haven for hate groups and targeted harassment, and a new survey shows just how far in the lead Facebook is compared to other social media platforms on fostering hate speech.

A new joint survey from the Anti-Defamation League and YouGov shows that, of those who said they’ve been harassed online in the past year, 77 percent of respondents said it happened at least once on Facebook. That’s a 21-point increase from 2019, and is miles ahead of the second-most cited platform for harassment, Twitter, which registered 27 percent.

Overall, 44 percent of all Americans said they’ve experienced online harassment over the past year. Of those who were harassed, 55 percent of respondents said it was in part due to their political views, and another 35 percent said it was due to their physical appearance – up from 21 percent in 2019.

In terms of harassment of minority groups, LGBTQ+ individuals reported the highest level of harassment at 65 percent in 2020. Male and female respondents reported similar numbers, with 47 percent and 42 percent, respectively, saying they’ve experienced some form of online harassment this year. 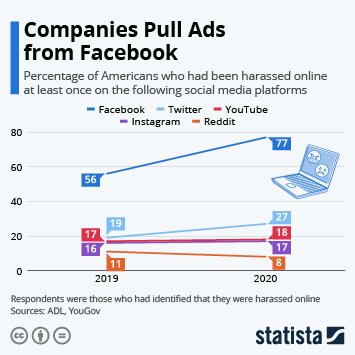 This chart shows the percentage of Americans who had been harassed online at least once on the following social media platforms.