The Seoul Metropolitan Government has announced that it is installing 24 so-called pedestrian scramble crossings after a first pilot project has been deemed successful, bringing the future number of the crossing type in the South Korean capital to 25. The pedestrian scramble, also known as the Barnes Dance, allows pedestrians to cross an intersection in all directions – including diagonally – at the same time, momentarily halting all vehicle traffic (and vice versa).

The special type of crossing has in the past been popular in the United States, Canada and Australia and has more recently been implemented in Japan and China. Studies found that pedestrian scrambles work well in intersections with a high volume of foot traffic in addition to a moderate-to-high volume of vehicle traffic. Especially intersections with a lot of turning vehicle traffic, which at an ordinary intersection would have the right of way at the same time as pedestrians, can see their pedestrian crashes greatly reduced under the system. According to a New York City Department of Transportation study, pedestrian scramble crossings reduced pedestrian-vehicle crashes by 51 percent over a seven-year period, while during the same time period, these crashes were only down 9 percent in a control group of regular NYC intersections.

But the system also has its downsides. The same NYC study found that crashes involving only vehicles increased by 10 percent in seven years. Yet, overall improvements to traffic safety reduced these accidents by 12 percent in the control group. More vehicle crashes could have occurred due to crowding and the impatience of drivers caused by longer wait times for all participants in pedestrian scramble crossings. For pedestrians, these wait times can lead to an increase in jaywalking (if vehicle volumes allow) as well as sidewalk crowding.

According to the NY DOT, the advantages of pedestrian scrambles only outweigh the disadvantages in specific situations, for example high danger to pedestrians due to a majority of cars turning, a high pedestrian desire to cross diagonally at asymmetric intersections or to reach certain business or transport entrances and high enough vehicle traffic to rule out jaywalking.

Since the system is mostly implemented at larger crossings, pedestrians are further slowed down by vehicle traffic being granted two phases (typically one for each through direction), while pedestrians are given only one slightly longer phase. To remedy the situation, the Canadian city of Toronto gives pedestrians the option to cross during their own phase or with turning traffic, giving priority to their movement (if not their separation from turning vehicles). 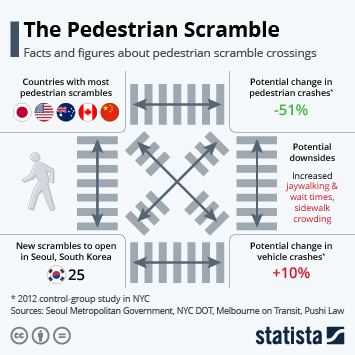