100 years ago, the rise of Communism started in China, but that is a long time for things not to change. Despite the ruling Chinese communist party celebrating the 100th anniversary of its founding on July 1, the private sector is the driving force behind the country’s economy today.

Data gathered by McKinsey & Company shows that just in the past 20 to 25 years, the share of Chinese urban employment supported by private enterprises more than quadrupled from just 18 percent in 1995 to 87 percent in 2018. Exports created by the private sector also more than doubled from 34 percent to 88 percent. Private influence on fixed asset investment is still lower at 65 percent in 2018, up from 42 percent in 1995.

The Communist Party has been ruling China since 1949, but it is arguably a very different country today. China’s economic miracle, which included rapid urbanization, industrialization and exploding GDP figures, transformed the country into one of the leading world powers without the Communist party ever loosening its tight grip on power. Reporting by ABC points out that China has solved a major problem of non-democratic regimes, the transfer of power from one leader to the next. Current president Xi Jinping, however, has arguably weakened that system by abolishing term limits, installing himself as president and party leader for life.

Yet, the ongoing economic progress made possible by sweeping concessions to the private sector makes the probability of a regime change in China unlikely. After a long time of giving the market economy free reign, the Chinese government has recently begun to curtail the private sector. Antitrust probes into China’s tech giants and the halt of the Ant Financial IPO are two examples of this, but they are also reminiscent of the problems Western democracies are facing in regards to the internet economy.

Despite their long reign, both the Chinese Communist Party - one of the biggest parties in the world at around 90 million members – and the Chinese state have proven persistent. The 71-year-old People’s Republic could soon become the second oldest one-party government in history after North Korea which was founded in 1948. Other one-party states faltered around the 70-year mark. The Soviet Union existed for 74 years, while the one-party rule in Mexico lasted for 71 years until the year 2000. 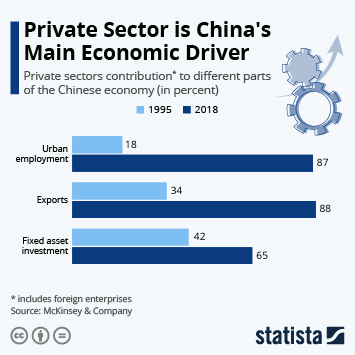 This chart shows private sectors contribution to different parts of the Chinese economy (in percent).