34 million U.S. households had difficulty paying energy bills in 2020, according to the latest survey by the U.S. Energy Information Administration (EIA). Of those, 1.4 million recorded someone needing medical assistance because it was too expensive to keep their home at a safe temperature.

As might be expected, households with lower incomes saw a greater share of respondents having difficulty meeting their energy needs. For instance, out of the group of earning less than $10,000 per household per year, 57 percent recorded energy concerns. For people with an annual household income of $100,000 or more, this figure dropped to only 9 percent. Whether a household had children or not also appears to be an indicator, with family households 10 percentage points more likely to have experienced energy difficulties than those without children.

Data shows once more just how divided the U.S. is, with energy costs disproportionately impacting some communities over others. Among Black respondents, 52 percent reported experiencing energy insecurity in 2020. Among Hispanic or Latino respondents, the figure was also high, at 47 percent. White respondents saw much lower rates of energy insecurity, at around 23 percent.

The EIA reports that where 31 percent of respondents, or 37 million households, said they had experienced energy insecurity in 2015 - the last recorded wave of the survey - the country has at least seen some improvement, dropping to 27 percent of U.S. households. 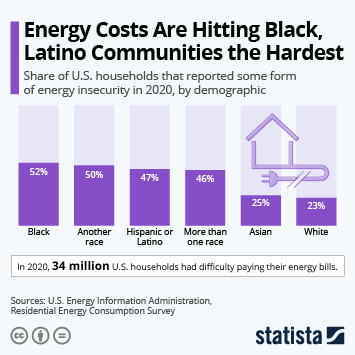 This chart shows the share of U.S. households that reported energy insecurity in 2020.