Published by
Aaron O'Neill,
Nov 19, 2021
Puerto Rico is an archipelago located in the northeastern Caribbean, east of the Dominican Republic, and west of the United States Virgin Islands and the British Virgin Islands. It is a self-governing commonwealth that is also territory of the United States. The capital and largest city of Puerto Rico is San Juan.

The problem of population decline

The total population of Puerto Rico is declining. Since 2016, the number of inhabitants has decreased by approximately 300,000 people. The decreasing numbers become even more obvious in the year-over-year growth. For over a decade, the Puerto Rican population growth has been on a steep decline. The decrease is so severe, Puerto Rico has even been ranked among the countries with the highest population decline rate for the past years. One cause of this is the fertility rate, which has also been steadily decreasing. However, due to improved infrastructure and health care, life expectancy at birth and average age of the population, both usually factors in the reduction of population figures, have been increasing slightly over the past decade. Another reason is, of course, emigration. Younger Puerto Ricans move elsewhere to find work or better economic conditions. Since Puerto Ricans carry U.S. citizenship, many move there.

Neither a U.S. state nor an independent country

Originally a Spanish colony, Puerto Rico was invaded by the United States during the Spanish-American War of 1898, putting an end to centuries of Spanish rule. Today, Puerto Rico remains a United States territory, despite a 2012 non-binding referendum which proved that over two thirds of the voters favored statehood. Due to the tropical climate and year-round warm weather and the varied landscape, tourism is one of the most important sources of income in Puerto Rico.

Puerto Ricans do not pay United States income tax, and the island receives federal funds. Despite this, the Puerto Rican economy is struggling a bit due to the low incomes and high unemployment rate, which has been hovering in the double digits for most of the last two decades. In addition, the real gross domestic product in Puerto Rico is in the red and shows no real signs of recovery. Its trade balance, however, has been on the rise over the past decade, reflecting the positive development of export and import. One of Puerto Rico's most famous exports is Bacardi rum, which is an important pillar of Puerto Rican economy, along with tourism.

In the following 2 chapters, you will quickly find the 21 most important statistics relating to "Puerto Rico".

The most important key figures provide you with a compact summary of the topic of "Puerto Rico" and take you straight to the corresponding statistics.

Social media usage in the Caribbean

Cruise industry in the Caribbean

Crime in the Caribbean 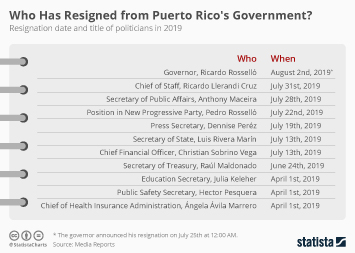