Published by
Federica Laricchia,
May 16, 2022
Panasonic Corporation was founded by Kōnosuke Matsushita in 1918 as a lightbulb socket manufacturer. Over the years, Panasonic Corporation – headquartered in Kadoma, Osaka – has grown, becoming one of the major Japanese international conglomerate companies, like Hitachi, Sony, and Toshiba. Nowadays, the company has a strong presence in various business segments, from home appliances to industrial solutions. Televisions, cameras, and camcorders, as well as automotive, avionic, and integration systems are just a few examples of electronics produced by Panasonic.

Panasonic’s competition: many markets, many rivals

Panasonic Corporation is one of the largest consumer electronics companies in the world, with sales of roughly 62 billion U.S. dollars in 2021. However, the company faces many competitors, and not only in the consumer electronics market. There, LG Electronics and Sharp are among Panasonic’s biggest rivals. Furthermore, LG Chem and the Chinese company CATL are strong competitors in the lithium-ion battery market, of which Panasonic occupies around 14.7 percent. Finally, since 2021, Panasonic has been playing a bigger role in the automotive telematics control market, controlled by LG and Continental, which hold over 35 and more than 25 percent of the market, respectively.

In the following 3 chapters, you will quickly find the 24 most important statistics relating to "Panasonic". 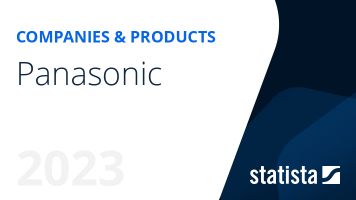 The most important key figures provide you with a compact summary of the topic of "Panasonic" and take you straight to the corresponding statistics.