Published by Statista Research Department, Dec 6, 2021
North America is home to most of the wealthiest individuals in the world, which means that there is also a high demand for luxury homes in the United States and Canada. The region alone has almost 74,000 ultra high net worth individuals, more than any other region in the world. A survey of private bankers and wealth advisors from across the world found that approximately 27 percent of ultra high net worth individuals bought a new home in 2020 and 29 percent were planning to purchase one in 2021. As the housing market gets hotter than ever and demand remains robust, luxury properties took less than a month to sell as of March 2021.

How much does a luxury home in the hottest markets in the U.S. cost?

Which cities in Canada had the most luxury home sales?

Vancouver and Toronto were undoubtedly the largest luxury home market in Canada in 2020, with approximately 1,850 and 1,800 units sold in the first half of 2020. In Vancouver, the average luxury home sold for 1.85 million Canadian dollars in 2020, making it the most expensive market. Nevertheless, in Toronto, luxury properties sold the fastest: The average number of days between listing a property and a sale was a little over a month, compared to 55 days in Vancouver and Ottava. When comparing condo prices, Toronto had the highest prices amounting to 1.2 million Canadian dollars in 2020.

In the following 5 chapters, you will quickly find the 24 most important statistics relating to "Luxury residential real estate in North America".

The most important key figures provide you with a compact summary of the topic of "Luxury residential real estate in North America" and take you straight to the corresponding statistics.

Millennial homeownership in the U.S. 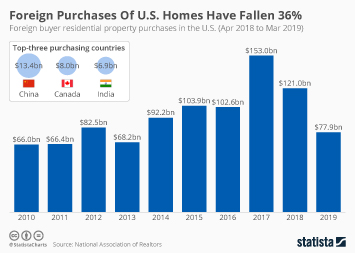