Nothing says cool like a nice pair of sunglasses. Not only is it an effortless way to look stylish, but they also prevent the harmful UV rays of the sun from damaging one's eyes. They can be corrective or non-corrective. Non-corrective sunglasses are also known as plano sunglasses. The United States is home to the largest sunglasses market in the world, generating over four billion dollars in revenue in 2021.

The market for sunglasses is heavily concentrated, with the eyewear company Vision Source ranked first of optical retailer in the United States, with sales that amounted to about 2.6 illion U.S. dollars in 2020. Luxottica, an Italian company, generated almost two billion dollars in retail sales in the United States alone in 2020, and over 7.7 billion euros in worldwide net sales. Essilor is another major player in the global sunglasses market, with revenue of 6.7 billion euros worldwide.

As of 2021, the country with the highest per capita volume sales of sunglasses was U.S., at 0.29 sunglasses per person. Russia, Brazil, and Canada had a per-capita volume of 0.23 pieces in the same year. A 2019 survey found that over 80 percent of Americans wore sunglasses in the summer season. In winter, less than a third of American consumers wore sunglasses.
This text provides general information. Statista assumes no liability for the information given being complete or correct. Due to varying update cycles, statistics can display more up-to-date data than referenced in the text.
P. Smith
Research expert covering apparel industry and general merchandise
Get in touch with us now
Published by P. Smith, Jan 12, 2022

Share of the global eyewear market in 2018 and 2024, by product category

Revenue of the sunglasses market worldwide by country 2021

Share of Americans who bought glasses/contact lenses at BJ's Optical 2018, by age

Share of Americans who bought glasses/contact lenses at Costco Optical 2018, by age

Expenditure of affluent U.S. households on men's accessories from 2013 to 2016 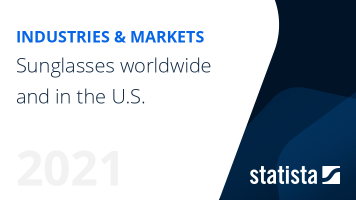 Go to report Sunglasses worldwide and in the U.S.
Top Seller

The most important key figures provide you with a compact summary of the topic of "Sunglasses in the U.S." and take you straight to the corresponding statistics.