Published by Statista Research Department, May 10, 2021
Everyone wants to feel like the king or queen of their own castle, and there is no other type of home that makes one feel this way more than a single family house. In the United States, close to 44 million individuals lived in rented single family homes as of 2019. However, the number of home sales is expected to increase from about 6.5 million in 2020 to nearly 7.1 million by 2021.
There is an upward trend in the average size of floor area in new single-family homes. In 1975, a new home had an average floor area of about 1,660 square feet. By 2019, this figure had increased by about 900 square feet. The number of single family building permits in the United States has fluctuated considerably since 2000. Between 2005 and 2009, the number of building permits for single family homes decreased fourfold, and amounted to about 978,000 permits in 2020.

In the following 4 chapters, you will quickly find the 20 most important statistics relating to "Single family homes in the U.S.".

The most important key figures provide you with a compact summary of the topic of "Single family homes in the U.S." and take you straight to the corresponding statistics.

Affordable housing in the U.S. 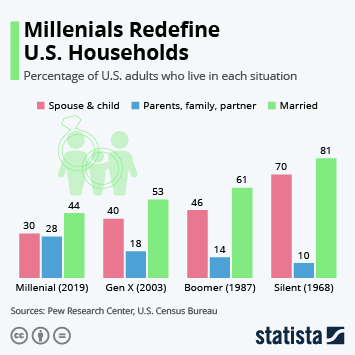