Published by
Shangliao Sun,
Mar 15, 2021
The Indian automotive industry has been dominated by two-wheeler production over the past few years. In 2019, two-wheelers accounted for more than 80 percent of the market. Despite having a market share of just four percent, commercial vehicles were a crucial part of the industry. In 2019, commercial vehicle sales hit a six-year peak, with over a million vehicles being sold. Tata Motors was the leading manufacturer of commercial vehicles that year, accounting for a share of over 40 percent.
Eicher Motors Limited, a motorcycle and commercial vehicle manufacturer. Since this JV in 2008, Eicher was rebranded to Volvo Eicher Commercial Vehicles Limited, with the Swedish counterpart owning over 45 percent of VECV. The latter owns five business units – Eicher Trucks and Buses, Volvo Trucks India, Eicher Engineering Components and VE Powertrain. Royal Enfield Motors, the manufacturer of the motorcycle Bullet is a subsidiary of EML.

In 2019, EML recorded sales worth 98 billion Indian rupees, and was projected to reach almost 116 billion rupees by 2022. The commercial vehicle segment VECV sold around 3.8 thousand units in October 2019 alone, with about 915 dealers across the country. Despite entering this segment only in 2002, Volvo-Eicher had a share of just over six percent of the market in 2019.

Despite these optimistic numbers, the economic slowdown in India had affected the sales in the automotive sector, with commercial vehicles being worst hit. Inventory levels touched 60 days as opposed to the norm of two-three weeks. The sluggish progress prompted truck makers to resort to heavy discounts in order to boost sales. Heavy discounting by market leaders, such as Ashok Leyland and Tata Motors, had an adverse affected on smaller rivers such as EML and Daimler India.

In the following 5 chapters, you will quickly find the 26 most important statistics relating to "Eicher Motors". 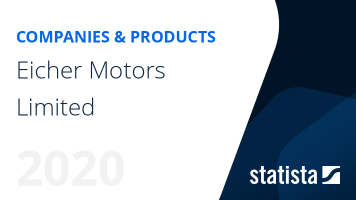 The most important key figures provide you with a compact summary of the topic of "Eicher Motors" and take you straight to the corresponding statistics.

Two and three wheelers in India