Anglo American is a mining company headquartered in London, the United Kingdom. Founded in 1917 in Johannesburg, South Africa, it is now one of the largest mining companies worldwide based on market cap. With 56 sites across 15 countries around the world,. its operations are mainly in the exploration and extraction of natural commodities such as base metals, minerals, precious metals. In 2021, Anglo American’s revenue totaled 43.3 billion U.S. dollars.

What does Anglo American produce?

Anglo American has vested interests in numerous commodities. These include copper, diamonds, coal, polyhalite, nickel, iron ore, manganese, and platinum. Anglo American is the world’s second-largest producer of platinum, accounting for one quarter of the world’s annual production as of 2020. The two most financially rewarding of Anglo American’s segments are the Platinum segment and the Iron Ore and Manganese segment. In 2021, Anglo American's iron ore production totaled 41 million metric tons at the company's Kumba mine in South Africa, and another 23 million metric tons at its Minas-Rio mine in Brazil. South Africa is also a source of thermal coal production for the company. However, Anglo American’s is exploring the sale of its coal mining assets. This is due to pressure from investors, regulators, and environmentalists to move away from the polluting fossil fuel as the world looks to cleaner energy sources. Accordingly, the company's coal production has decreased considerably in the past two years.

A Diamond is Forever: Anglo American's ownership of De Beers

In 2011, Anglo American increased its stake in the diamond company De Beers to 85 percent, with the remaining 15 percent owned by the Government of the Republic of Botswana. In addition to mines in Botswana, De Beers recovers diamonds in neighboring African nations Namibia and South Africa, as well as in Canada. De Beers is one of the leading diamond mining companies worldwide, with a market share of 23 percent. In 2021, De Beers' diamond production amounted to roughly 32 million carats of diamonds.
This text provides general information. Statista assumes no liability for the information given being complete or correct. Due to varying update cycles, statistics can display more up-to-date data than referenced in the text. 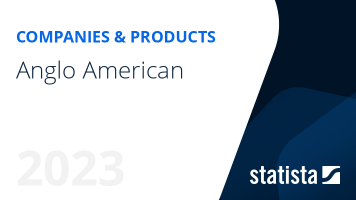 The most important key figures provide you with a compact summary of the topic of "Anglo American" and take you straight to the corresponding statistics.