Global expansion of The Cheesecake Factory

Given that The Cheesecake Factory was founded in California and its only restaurants were located there until the 1990s, it is not surprising that as of 2021, California was the U.S. state with highest number of The Cheesecake Factory establishments. In that year, the chain had locations in 39 states plus Washington D.C. and Puerto Rico, and there were 39 locations operating in California alone. The company has also expanded its assets globally and, as of the end of 2021, had businesses in UAE, Kuwait, Saudi Arabia, Qatar, Bahrain, Mexico, the Chinese Mainland, and Special Administrative Regions of Hong Kong and Macau. Total assets of the Cheesecake Factory worldwide amounted to 2.8 billion U.S. dollars in 2021. This figure reflected an increase over the previous year’s drop in assets, which was most likely due to the lack of in-house dining as a result of the coronavirus (COVID-19) pandemic. Despite the interruption in growth, the global revenue of The Cheesecake Factory peaked at 2.93 billion U.S. dollars in 2021.

The Cheesecake Factory’s place in the U.S. restaurant market

Revenue of The Cheesecake Factory globally 2009-2021 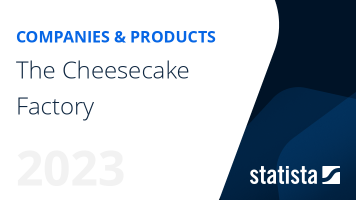 The most important key figures provide you with a compact summary of the topic of "The Cheesecake Factory" and take you straight to the corresponding statistics.

The FSR industry in the U.S.