88.9k
When Facebook went public in May 2012, the company's shares were priced at $38. On the first day of trading, the stock price didn't jump as anticipated and would likely have fallen below the IPO price of $38, if the IPO's underwriters hadn't stepped in to support it. In subsequent weeks though, the share price quickly fell below $30 and continued to slide for months. It took the stock more than a year to return to its IPO price, clearly indicating that the IPO had been priced too high by Facebook's underwriters.

18 months later, Twitter, having witnessed first hand how hard Facebook's reputation had been hit by its disappointing IPO, was desperate to avoid making the same mistake as its big rival. The company's IPO was priced at $26, which was above its initial price range, but still modest according to many experts who anticipated massive demand for Twitter's shares. When Twitter finally made its trading debut on November 7, the share price jumped more than 70 percent, creating a lot of positive press for the company. The fact that Twitter's shares have continuously traded above $40 since the IPO and are currently approaching $50 indicates that conversely to Facebook's IPO, Twitter's IPO was significantly underpriced.

In the end it seems that Twitter avoided Facebook's IPO mistake, overpricing, by making another mistake, underpricing. To figure out which is worse, one needs to remember what the goal of an initial public offering is. Normally, a company goes public in order to raise money that can be invested in the company's growth. By pricing its IPO very high, Facebook squeezed every dime out of the investors waiting eagerly to get in on the hottest IPO of all times. The company ended up raising more than 16 billion dollars in return for lot of bad publicity and some disgruntled investors. Twitter chose the opposite route. Selling 80 million shares at $26 a piece, the company raised $2.1 billion when it easily could have raised more. Assuming a possible IPO price of $40, Twitter left more than a billion in investment capital on the table or rather in the accounts of its early investors. Twitter sacrificed that money in return for a lot of goodwill, but filling the pockets of banks and investors has never been the purpose of an IPO. So in the end, by avoiding Facebook's mistake, Twitter may have made an even bigger one: losing out on a billion dollars worth of additional capital. 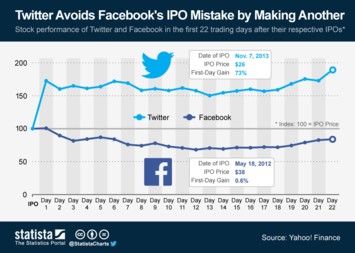 It's been a little more than a month now since Twitter made its stock market debut in the most-anticipated IPO since Facebook went public in May 2012. As opposed to Facebook's IPO, Twitter's IPO was widely hailed as a success. But was it really?