53k
74.6k
87k
88.9k
When Coachella 2019 goes into its second weekend tomorrow, more than a hundred thousand music fans from the United States and all over the world will have made their way to California to see their favorite artists perform. This year’s festival, headlined by Ariana Grande, Childish Gambino and Tame Impala, sold out within a few hours, with all general admission ticket the first weekend gone within 40 minutes despite the steep price of $429.

Located at the Empire Polo Club in Indio, California, the Coachella Valley Music and Arts Festival is held annually on two consecutive weekends in April. After the attendance cap for the festival was recently raised from 99,000 to 125,000 per day by the City of Indio, total attendance of the festival will amount to roughly 750,000 people over the course of six days. That makes Coachella one of the largest music festivals in the world, when looking at aggregate attendance over the entire course of the respective event.

While Coachella trails Moroccan mega event Mawazine and the Austrian Donauinselfest in terms of total attendance, it is probably the most fashionable festival to be at. If anyone ever wrote a “10 steps to becoming a fashion influencer” guide, attending Coachella would surely be near the top of the list. After all, what screams Instagram more than a dreamy selfie in the perfect lighting of the Californian sunset. 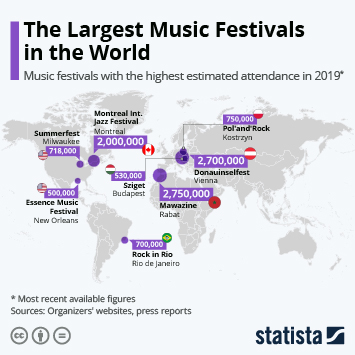 This chart shows the total attendance of the largest music festivals in the world.