Skip to main content
53k
74.6k
87k
88.9k
An analysis by USA Today has found that U.S. President Donald Trump has used the terms “alien”, “criminal”, animal”, “killer”, “predator” and “invasion” when talking about immigration more than 500 times during 64 rallies held since February 2017. The newspaper reviewed transcripts of the rallies.

Trump additionally said immigrants should get “the hell out of our country” 43 times during the rallies.

Trump recently received criticism for his language after a manifesto by the alleged El Paso shooter, who is supposed to have killed 22 people in a Walmart on Saturday, surfaced online. In it, the alleged perpetrator said, among other things, that his attack was “a response to the Hispanic invasion of Texas”. Because of the racial hatred included in the writing, investigators are treating the shooting as a case of domestic terrorism.

A second shooting, where a gunman killed nine people including his sister and injured 27 including a friend in Dayton, Ohio, took place on Sunday. The gunman was killed by police. Six of the victims were black. The shooter called himself a leftist, shared posts about violence against police on social media and said he was supporting Elizabeth Warren for president in 2020. The FBI have said that they were still investigating if and what violent ideology could be behind the act and that they considered the shooting to not be race related. The Dayton shooter did have a history of admiring mass shootings and had threatened to kill classmates in the past. 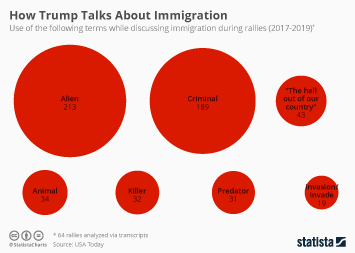 This chart shows negative terminology used by President Trump during rallies from 2017 to 2019 (as of August) when talking about immigration.