As cases of COVID-19 increase across the world, the epicenter of the disease in China has reported a dramatic decrease in daily confirmed cases after quarantining nearly 60 million people.

The coronavirus outbreak originated in the Chinese city of Wuhan within Hubei province, and has accumulated over 80,000 confirmed cases since its discovery. As cases quickly increased, the Chinese government effectively quarantined 56 million citizens in late January to try and stop the spread of the disease.

Nearly 60,000 cases have been classified as recovered in China, while the death toll has surpassed 3,000. Since February 18, China has reported the number of recovered cases is vastly outpacing the number of new confirmed cases each day, with 1,535 recoveries alone on March 8.

Ultimately, as cases in Italy, South Korea and the United States start to ramp up, China’s aggressive quarantine seems to have been effective up to this point and could be a model for how to contain the rapidly spreading disease. 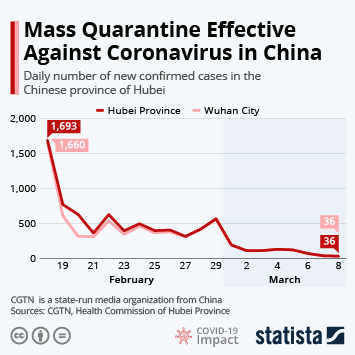 This chart shows the daily number of new confirmed cases in the Chinese province of Hubei.

Mental Health in the U.S.