In a bid to capitalize on the growth potential of electric vehicles, Ford announced a major restructuring on Wednesday that will separate its legacy ICE (internal combustion engine) business from its electric vehicle division.

The former, to be called Ford Blue, is supposed to take advantage of the company’s portfolio of iconic ICE-powered vehicles in a very cost-effective manner in order to provide profitability and cashflow for the entire company. Meanwhile, the EV division, called Model e, is designed to bring “the focus and speed of a startup” to a company whose CEO admitted last year that it struggled to be agile enough to keep up with the dynamics of the EV market. “Ford Blue and Ford Model e will operate as distinct businesses, but share relevant technology and best practices to leverage scale and drive operating improvements,” the company said in the announcement of the transformation.

Aiming to produce 2+ million electric vehicles per year by 2026 and to make half of its annual sales volume electric by 2030, Ford is investing heavily in its EV production capacity. In 2022, the company plans to invest $5 billion, roughly double the 2021 total.

As the following chart, based on data provided by industry tracker EV Volumes, shows, Ford has a lot of catching up to do in the electric vehicle segment. Having sold a combined total of 117,500 battery electric vehicles (BEVs) and plug-in hybrids (PHEVs), Ford is far off the leaders in the rapidly growing market. While Tesla is still the largest maker of electric cars, legacy automobile groups such as Volkswagen, GM and now Ford, are pushing hard for their slice of the increasingly large pie. 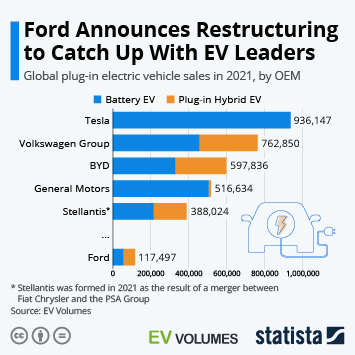