Have you ever rushed through an airport security check only to realize some change fell out of your pocket along the way? In the United States, the Transport Security Administration gets to keep all money lost by careless travellers during security screening. Even though a few coins falling into the odd tray at security may not seem all that much, it swiftly adds up.

In 2019, passengers at John F. Kennedy International in New York City left $98,110 behind them, the highest amount collected at any U.S. airport. San Francisco International followed with $52,669 while Miami International came third with $47,694. Unclaimed money is deposited into a special account where it can be tracked before it is spent.

The TSA had $3,618,969 in resources from loose change on September 30, 2019 and $2.1 million of it was obligated for training with just under $1 million spent during the year. In 2020, $1,518.696 worth of collected loose change was on the books with around $1.1 million of it spent on Covid-19 mitigation efforts such as the purchase of masks, gloves, plexiglass shields and other protection measures. When the amount of money collected in 2020 is taken into account, the TSA had $925,457.32 available for use by the end of the year. 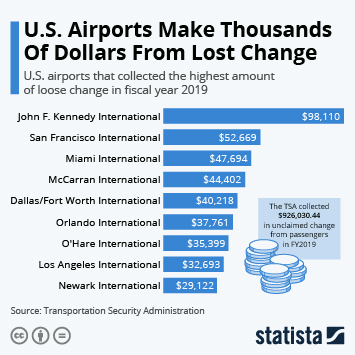