88.9k
President Trump has made it clear that he intends to overhaul and revitalize America's potholed roads, disheveled railways and creaking bridges. The country's aging and increasingly dilapidated infrastructure is becoming a major problem with the government reporting that 70,000 bridges are classified as being structurally deficient. Even though infrastructure has been dismissed all too often as a boring topic, its importance to the US economy is mindboggling.

According to a report from the American Society of Civil Engineers, the US economy will lose around $4 trillion in GDP between 2016 and 2025 if investment is not forthcoming. If the country's aging roads, railways and bridges are left to decay even further, that could rise to $14 trillion by 2040. Likewise, business sales will also take a substantial hit. The report forecasts that left unchecked, poor infrastructure will result in business sales losing $7 trillion by 2025 and $29.3 trillion by 2040. American household income will also feel the impact.

Between 2016 and 2025, each household will lose $3,400 due to infrastructure deficiencies. The economic turmoil will also result in job losses and 2.5 million are set to be cut by 2025, according to the report. Without badly needed investment, that number should reach 5.8 million by 2040. At the start of the month, Trump said he wanted his White House team to draw up a plan for $1 trillion in infrastructure spending. It would streamline local permitting, favor the renovation of existing roads and prioritize new projects that could start quickly. Time is of the essence; if action isn't taken, crumbling and rusty infrastructure is going to become one of America's biggest and most expensive problems. 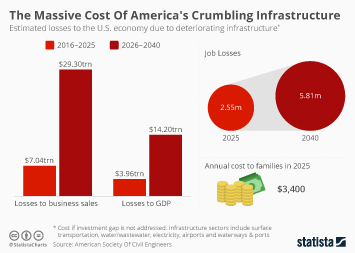 This chart shows the estimated losses to the U.S. economy due to deteriorating infrastructure.