40k
57k
41k
9.6k
One of the key concerns surrounding the now seemingly imminent repeal and replacement of Obamacare is the fate of those Americans with a preexisting condition. Currently, under the ACA, such people can get cover without having to pay an extra premium.

Trump's American Health Care Act (AHCA), however, would change that. Under the new law, states would be able to apply for a waiver, allowing them to charge people with preexisting conditions more for their coverage. Those with conditions such as epilepsy or cancer would be removed from the insurance pool and placed in a so-called 'high-risk pool' meaning healthier people can enjoy lower premiums.

Those in the high-risk pool would have their extra costs subsidized by the government - paid from a federal budget of $138 billion spread over ten years. Despite being a good idea on paper, some experts warn that the budget may be far too small. If a large proportion of states opt to set up high-risk pools, the money could end up being stretched far too thinly. If this turns out to be the case, the 27 percent of non-elderly adults that have a preexisting condition could find themselves footing the bill in some form.

As the infographic below shows, this situation could end up hurting President Trump's supporters the most. When looking at the states with the highest share of people with preexisting conditions, the 'top' eleven all voted Trump in 2016. Could high-risk pools end up being a political gamble that doesn't pay off for Trump? 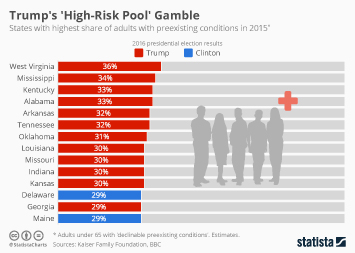 This infographic shows the U.S. states with the highest share of adults with pre-existing conditions in 2015.