London/New York, February 6, 2020 – The market for autonomous vehicles (AVs) will grow significantly from 2018 through 2030. Fully automated cars are expected to contribute some 13.7 billion U.S. dollars by 2030. One in ten vehicles will be self-driving by then. This is part of the observations of Statista’s newest DossierPlus on autonomous vehicles highlighting the current state of the industry.

Clearly, the market growth depends on the speed of consumer acceptance and the manufacturers’ ability to scale up production. Many consumers see attacks from hackers as the main barrier to autonomous vehicle adoption: Almost four out of five consumers do not trust self-driving cars to provide enough vehicle security. More than 70 percent of consumers do not think driverless vehicle systems will be safe from hackers.

With an estimated market size of 1,161 billion U.S. dollars robo-taxis are projected to become the top use case for driverless vehicles. As of today, businesses have already spent billions on related research and development activities to reap the enticing rewards of the robo-taxi market. 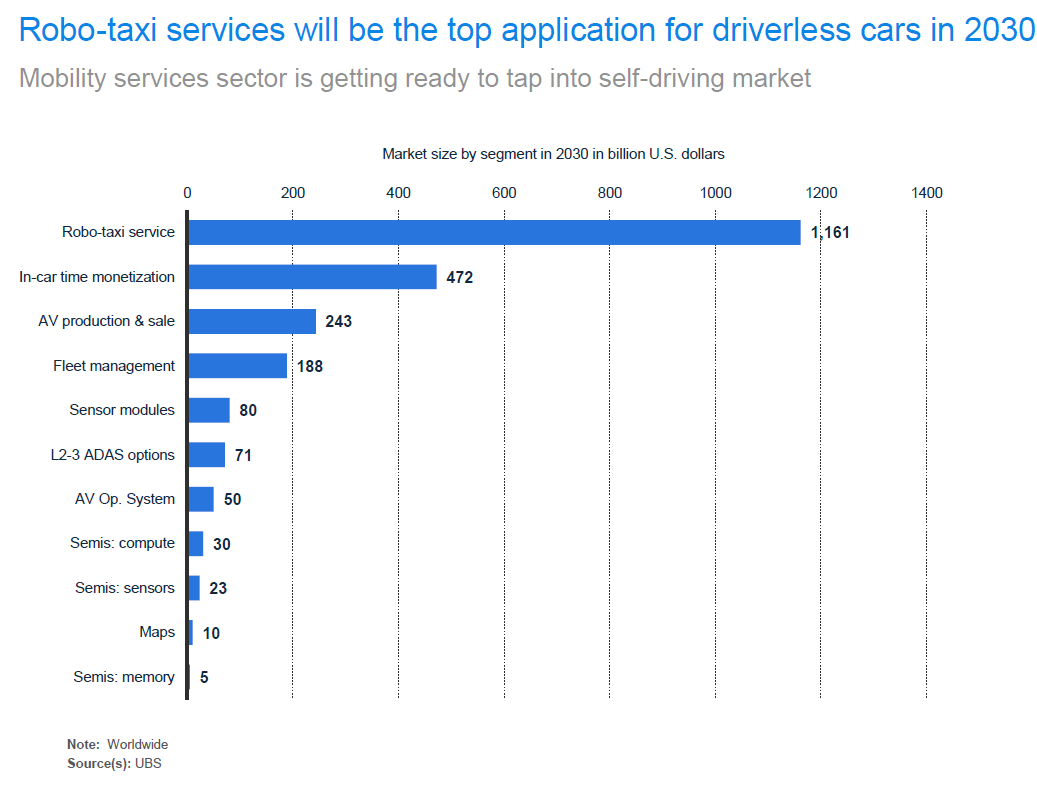 Autonomous driving has come a long way since Waymo started testing self-driving cars. Mobility provider Uber has started investing in self-driving cars, spending more than a billion US dollars over three years. When General Motors subsidiary “Cruise” garnered 3.4 bn U.S. dollars in funding in 2018, the overall automotive startup funding had increased ten-fold over the past five years: reaching a record-breaking 27.5 bn U.S. dollars in 2018. Traditional car manufacturers have come under pressure to raise capital to cope with the costs associated with employee training and research activities. With market commercialization still a decade away, companies such as Uber and General Motors are facing immense costs swallowed by their respective self-driving units. 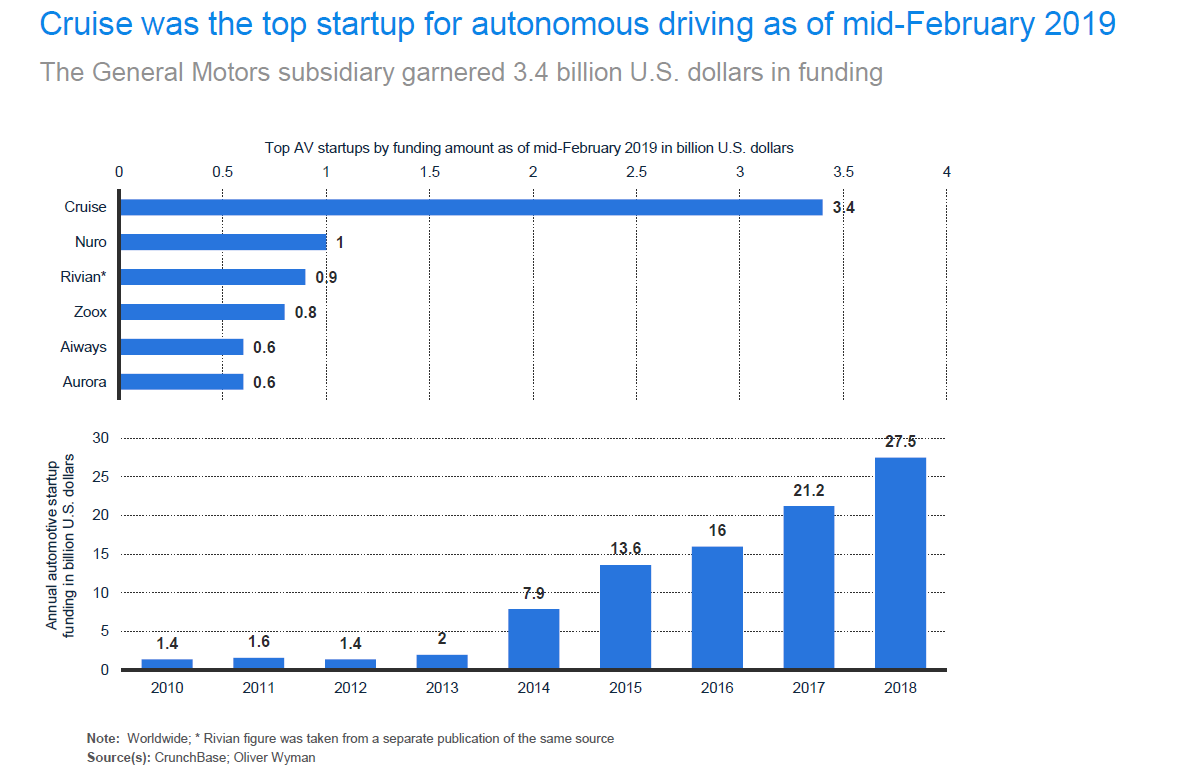 ADAS market to grow more than six-fold until 2025

Global demand for Advanced Driving (AD) and Advanced Driver Assistance Systems (ADAS) is also projected to spur the market growth for automotive semiconductors and sensors. These systems will prove crucial when machines are taking over the control helping driverless vehicles navigate and detect obstacles on the road. 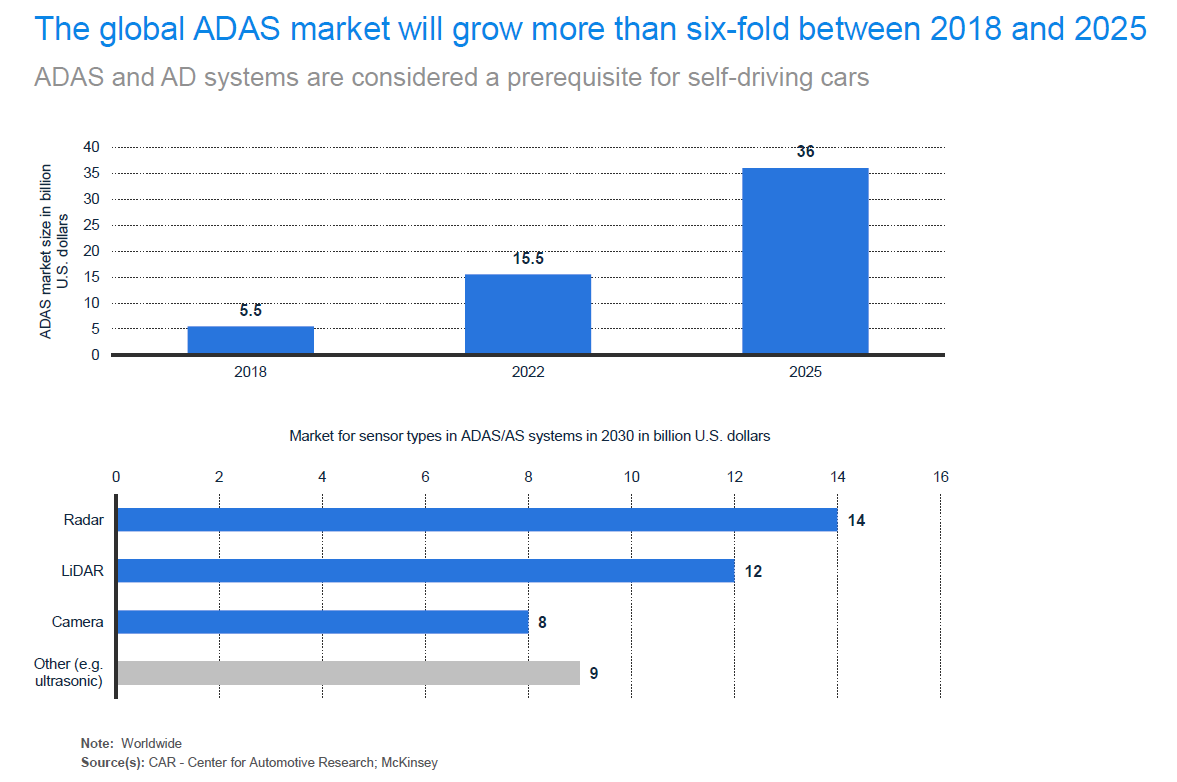 AV test pilots were most active in California, but Beijing, China and the city of Hamburg, Germany have also set up infrastructure for the testing of geo-fenced driverless vehicles. Hamburg will see autonomous public transport beginning in 2021. After billions of miles of tests in simulations or on public roads, self-driving cars are beginning to leave the test tracks. Finally, the curtain rises on the next act of mobility disruption: driverless cars.